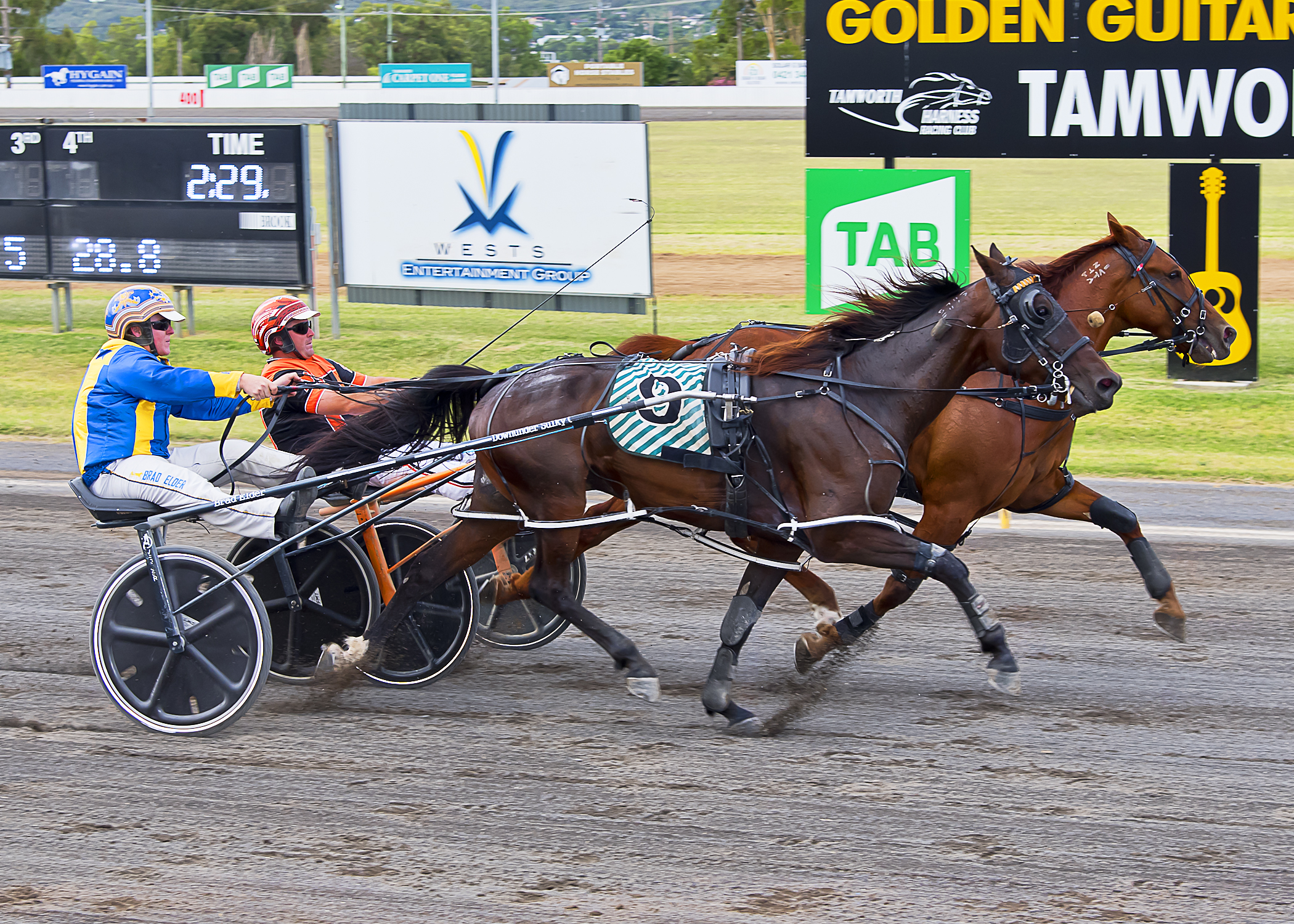 Golden Guitar5 Shadow Pass1
THE Tamworth-owned Shadow Pass was the first to gain entry into Sunday’s $30,000 Multiquip Golden Guitar Final – the feature race on the Tamworth...

THE Tamworth-owned Shadow Pass was the first to gain entry into Sunday’s $30,000 Multiquip Golden Guitar Final – the feature race on the Tamworth Harness Racing Club meeting.

Still, it took a close finish and a dismissed protest before he was declared the winner.

Shadow Pass is part-owned in Tamworth by Tim Varga, who races the seven-year-old gelding along with Eddie Doughan and Matt Hunt and is trained at Central Mangrove by Roy Roots jnr.

“I won a Golden Guitar final way back in 2011,” said Roots jnr, who etched his name on to the trophy as trainer of Jasper Gold that year, with Mark Callaghan as his reinsman.

“And I really like this horse – I think he has a good chance of winning on Sunday.”

Well-known Sydney reinsman Robbie Morris was booked to take the drive behind Shadow Pass from the two barrier in the first heat last Sunday and after urging the gelding forward found the lead in the home straight on the first occasion.

“He raced really well and it was a bit of a tight margin at the finish but I was happy with the horse,” said Morris after the win.

With the slowest mile rate of the five heats at 2.01.4 for 1980 metres Morris was not ruffled.

“He (Shadow Pass) could have probably gone a bit harder – he had it pretty easy early in the race so hopefully he is better for the final.”

With Shadow Pass leading the field, Maitland reinsman Brad Elder made a four-wide run around the final turn with the Joe Taaff- trained Tygar before sprinting down the home straight resulting in a close finish.

Shadow Pass, as second race favourite at $2.70, held on for a half-head win over Tygar with another of the Roy Roots jnr trained horses Yayas Hot Heart (Josh Gallagher) 7.5 metres away third.

“He did run up the track the whole race which was a bit of a concern,” said Morris

“But he did race as if he was the winner – he was just making it harder on himself.”

As the horses returned to scale Elder lodged a protest alleging interference over the concluding stages of the race but stewards declared that this did not affect the chances of Tygar with the protest dismissed.

“If you think you have a chance you might as well have a shot.” he further added of the protest.

Shadow Pass has drawn the one barrier in the Golden Guitar Final and regular reinsman Tom Ison will be back to take the reins.

Harding chasing a new record
Harding’s the ‘King’ of the Guit...
Ziggy ready to rock the Golden Guitar
Alchin gets a double shot at Tamworth features
About author