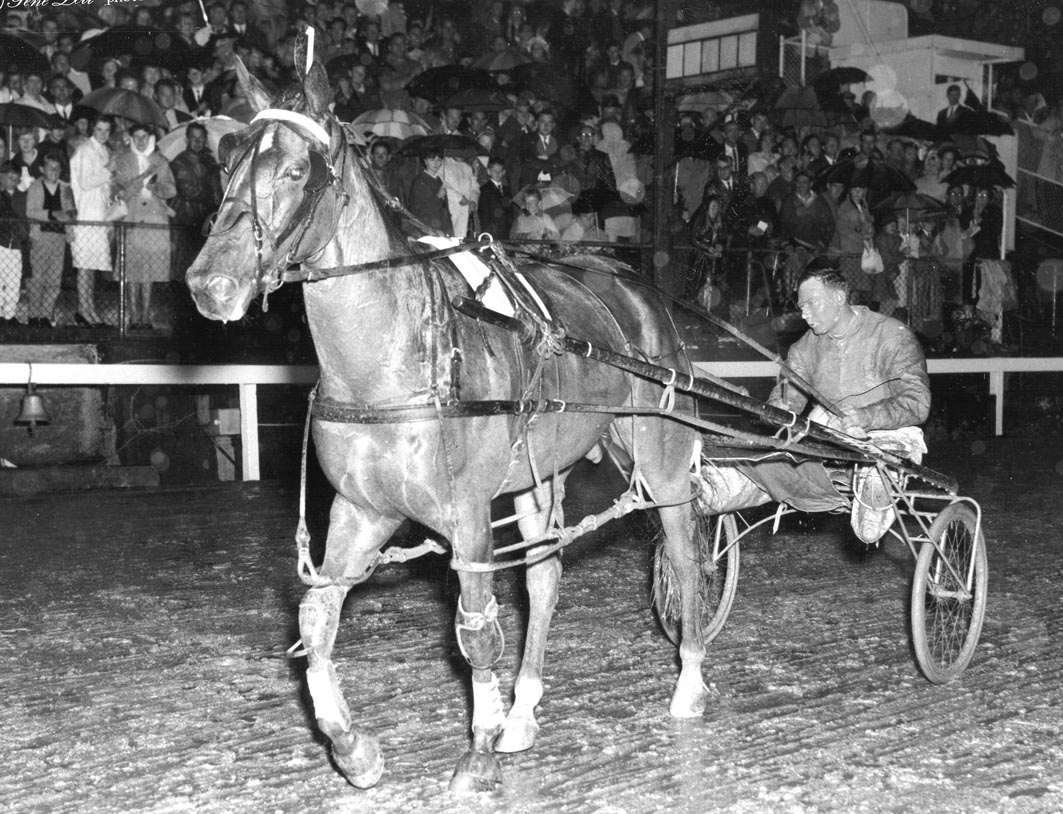 CHAMFER’S STAR was rated as much as a 200/1 chance ahead of 1966 Harold Park Inter Dominion, but that price didn’t last long after an encouraging trial before the opening round of heats.

In fact, history tells us the son of Chamfer made a clean sweep of the series to give Tasmania its first Inter Dominion winner since Bandbox in 1947.

Roughly 20,000 people attended the Glebe venue to watch the first night of action and were not disappointed as Dale’s Gift captured the first heat in a record rate of 2:07.6 after starting off 12 yards.

Tactile was second after suffering early interference but Dale’s Gift’s win – his seventh consecutive victory – earned him plenty of credit as it was his first run from an injury-enforced layoff.

In what was also his Harold Park debut, Chamfer’s Star defeated Minuteman, which came off 24 yards, with Double Adios, for Jim Caffyn, closing late after blowing the start from the scratch.

Scottira was successful in the other heat, coming from 12 yards to beat champion New Zealander Robin Dundee (24 yards), which dead-heated with Jay Ar in the previous year’s Inter Dominion Final.

Dale’s Gift’s supporters were given a fright when the pacer became ill on the morning of the second round of heats.

Having swum in the ‘The Pond’ at Liverpool, it was suspected that he drank some water which had a severe reaction on him.

Although he drifted significantly in betting, Dale’s Gift proved he’d taken no serious harm from the scare by defeating Lookout by eight yards, with New Zealander Jacobite close up third.

It was one of the finest performances seen at the track for some time, Dale’s Gift rating 2:07.4.

Robin Dundee stole the show on the second night, however, producing a dazzling finish to win with Morrie Holmes in the cart.

Appearing hopelessly stuck on the rails, Holmes remained calm despite having a ‘wall’ of horses in front of him.

With Holmes eventually switching wide, Robin Dundee scorched around the field a furlong-and-a-half out to complete an impressive four-yard victory after being seven-wide on the turn!

Robin Dundee’s winning rate was 2:07, however, that didn’t deter Max Treuer, Chamfer’s Star’s trainer for the series, who declared his pacer had kept improving and with a front mark, would win the Final.

Chamfer’s Star, regularly driven by Hec Baker in Tasmania but throughout this series handled by Brian Forrester, had come up with the ultimate game plan for their charge – sprint around the bends, slow down in the straights.

Chamfer’s Star maintained his undefeated status by leading throughout to beat First Lee and Dale’s Gift.

Although he finished third, Dale’s Gift assumed favouritism for the Final after Robin Dundee only managed a luckless sixth.

Tactile, a brilliant juvenile and Inter heat winner in Melbourne two years earlier, needed to win to qualifier for the Final.

Heavily supported in betting (5/1 – 3-1/), Robert Cameron had Tactile away safely but was wide before finding the spot outside the leader.

Double Adios won the other 11-and-three-quarter furlong heat, by racing through on the rails to defeat Minuteman and Garry Dillon.

In a sensation just a day after the final round of heats, Double Adios was transferred to the stables of C.R Morphy.

Having been prepared by Jim Caffyn throughout the series, the switch was decided after Caffyn decided to drive Lookout in the Final.

Owner Jack Honan then asked Kevin Newman to drive Double Adios in the ‘big one’.

The Final was over 13 furlongs and 98 yards, with wet conditions hitting Harold Park throughout the afternoon, meaning the backmarkers, including Robin Dundee, would have to produce something special given the terrible conditions.

Coming off scratch, Chamfer’s Star – a 3/1 favourite – began well to find the front with Forrester setting the pace to suit.

Despite challenges from First Lee and Lookout, Forrester maintained the front and rated his horse to perfection to hold out the fast-finishing Robin Dundee, produced an outstanding performance from her 24-yard handicap.

Money not received because of what?
Turnbull glad he drove on through the rain
Modest plans for promising mare
Talented trotter’s successful comeback
About author