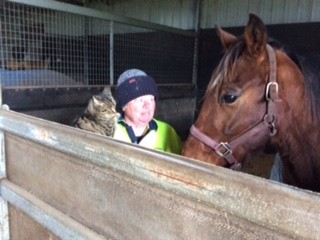 Shirley Drake and her pacer Sunday Cove - and the cat.

A stroke of luck sees Drake duck a ‘bullet’

John Dunne1 Shirley Drake1
SHIRLEY Drake’s phone is usually nestled firmly in her left pocket. For some reason she can’t explain Drake’s phone was in her right pocket...

For some reason she can’t explain Drake’s phone was in her right pocket while collecting feed at her western district (Victoria) farm in the early evening of July 17 last year.

The logistical anomaly wasn’t lost on Drake as she lay semi-conscious with the left side of her body pinned underneath a fallen hay bale.

Looking back, Drake realizes she was ‘warned’ of the pending drama by her border collie as she pushed the wheelbarrow towards the stack of bales.

“My dog, Maggie, never barks and all of a sudden she started barking as I entered the shed,” Drake said.

Drake recalls the moment she knew of the awaiting danger unfolding.

“I had peeled a couple of wafers off a bale when I looked up and saw a bale from the top of the stack falling towards me,” she said.

“It smacked me in the side of the face and knocked me out and when I came to the dog was licking my face and the cat was sitting on my shoulder.”

Drake was unable to move and with her free arm felt the phone in her pocket.

“I’m right-handed and always carry the phone in my left pocket but through some act of fate that day it was in the right pocket and I was able to call for help, otherwise I could have been laying there all night,” she said.

Drake was unable to see the screen to dial for help so she pushed the last number dialed and left a mumbled message for her neighbor Alan.

“After that I managed to dial triple 0 and spoke to a lady, about 15 minutes later Alan came charging down the driveway followed by the police,” she said.

Drake knew she had suffered a significant spinal injury when she attempted to lift her neck.

“It was really painful,” she said.

The 64-year-old Drake was transported by ambulance to a waiting helicopter where she was about to embark on her first foray into the air.

“I had never been in a plane or a helicopter in my life because I reckon it’s a long way to fall, but I told them that I would let them take me this once,” she said.

Drake was flown to Royal Melbourne Hospital where doctors diagnosed two fractured vertebrae in her neck.

While the injury didn’t necessitate an operation, Drake suffered somewhat unnerving side-effects to her vision.

“It was high up in the area which affects your eyes and the doctors warned me that I wouldn’t believe some of the things I would see,” she said.

“I remember one day being in the car with my sister going to get some groceries when all the other cars were coming towards our car and going through us like they were ghosts.”

A month ago Drake climbed into the sulky for the first time since the accident.

Drake acknowledged those who have assisted on her road to recovery including her neighbours, doctors, nurses and paramedics.

“I will be forever grateful, I just can’t thank them enough,” she said.

In the early 1980s Drake accepted an invitation from a neighbor to ‘come and have a drive of a trotter’.

“I came home and declared that I would never sit behind one again, but I went back the next day and was hooked,” she said.

It was inevitable that Drake would gravitate towards the standardbred as her father Henry was successful riding under saddle in trotting races aboard Lulu Jean during the 1950s.

“Dad used to tell me how he rode in races against trotters in the cart, he won races at Mortlake and Cobden,” she said.

All going well, Henry Drake is on track to receive a letter from the Queen later in the year.

Shortly after securing her driver’s licence in 1984 Drake landed her first winner when Hana’s Prince saluted at Ballarat.

During the late 1980s Drake had her eye on a son of Electric Guitar called Come On Ricky.

“I leased him off Bill Phelan and when I went to pick him up I noticed another horse in the paddock but they said that I wouldn’t want him,” she said.

Drake insisted and the subsequent horse turned out to be Tipperary Man, who provided the horsewoman with her first metropolitan win at Moonee Valley in June, 1994.

Meanwhile Drake is hoping to have the majority of her four-horse muster at the trials in four to six weeks.

“I’ve got an unraced four-year-old, Sunday Cove, along with Just Like Jagger and a trotter Lawando, who both haven’t raced for a couple of years so they’ll be a rusty,” she said.