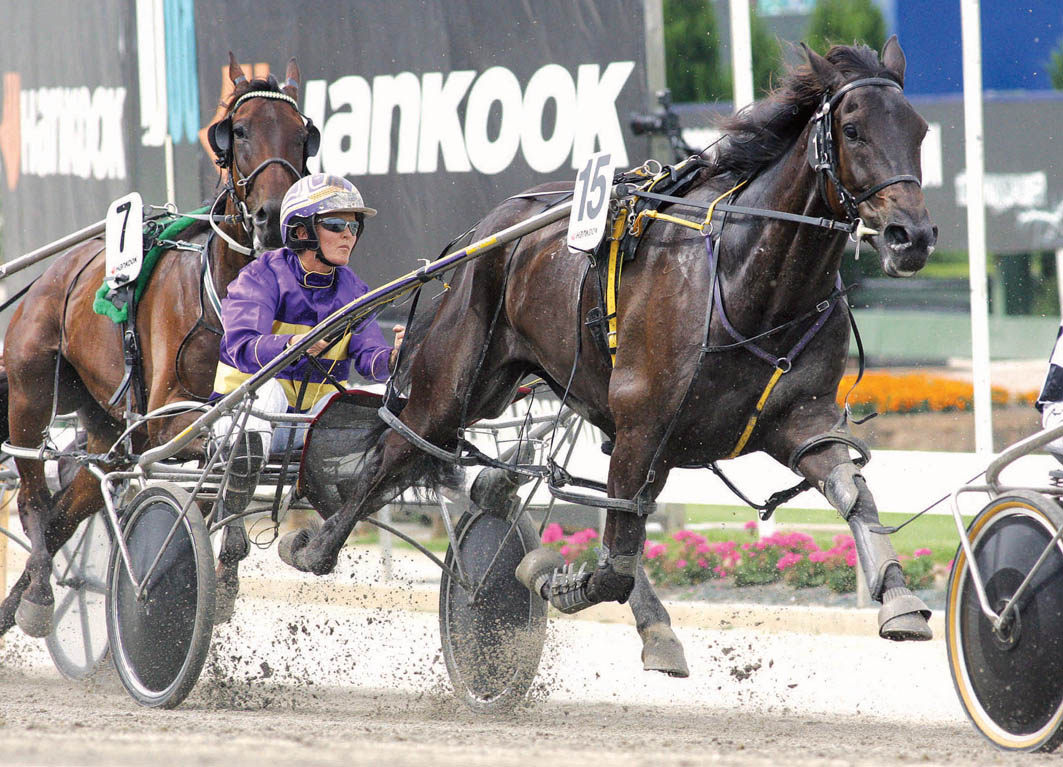 HISTORY was made on and off the track during the 2010 Inter Dominion.

Well, it’s the tracks which were part of the historic occurrences throughout the time honoured series.

Hosting the Inter Dominion for the first time in 1952, when Avian Derby emerged triumphant, Harold Park had been the home of eight Inter Dominion Finals, but was being replaced as the headquarters of harness racing in New South Wales.

Although the opening heats were conducted at the Glebe circuit, the Final took pride and place at the Club’s new world class venue in Menangle.

The spacious 1400-metre circuit was also the prime location for Blacks A Fake to create an Inter Dominion record.

As was the case in Queensland the previous, the traditional format of three heats into the Final was shortened to two rounds of qualifiers.

One of only two triple Inter Dominion winners, Blacks A Fake was making his second attempt at a record fourth triumph in the prestigious Championship.

The Natalie Rasmussen-trained star kicked off his campaign on the right note, winning his heat in 1:58.7 over 2160 metres.

Blacks A Fake’s win was the second leg of a heat double for Rasmussen, who partnered Atomic Ark to an upset 1:57.5 victory at $25 earlier in the night.

Fastest honours went to New Zealander Bondy, which rated 1:57.6 as a $2 favourite.

Fellow Kiwi, Monkey King, confirmed his status as Blacks A Fake’s biggest threat when he trounced his rivals for trainer Brendon Hill.

Contenders headed to Newcastle for the second round, with Blacks A Fake, Monkey King and Bondy proving too good once again.

Monkey King and Bondy led throughout the 2030-metre contests, rating 1:56.2 and 1:59.7 to justify their favourite status.

Blacks A Fake had to endure a harder runner.

After being caught three-wide from barrier nine, the son of Fake Left sat outside his Inter Dominion nemesis, Mr Feelgood, before scoring in 1:55.3.

Surprisingly, Baileys Dream, which was third on the first night, started a $2.50 from gate four before finishing fourth.

Runner-up behind Bondy in the opening round, Washakie claimed maximum points after also racing in the ‘death seat’ on his way to 1:58.9 win.

The stage was set for a stellar Final, with three trainers – Rasmussen, Hill and Geoff Small – qualifier two runners for the $1million Group One.

Ricky May stuck with Monkey King, while Todd Mitchell was booked for Baileys Dream.

Small engaged the Butcher boys for his pair, with David taking the reins behind Changeover and Phillip in the cart behind Our Awesome Armbro.

Although undefeated, chasing an Inter Dominion record and drawing slightly better, Blacks A Fake was the second elect at $3.70 behind Monkey King, which headed the market at $2.20.

History shows punters got it wrong!

Kept away from the early speed battles, Blacks A Fake was settled midfield as Washakie led and Smoken Up worked at his wheel.

Angled three-wide along the back straight – and providing Monkey King with the perfect trail – Blacks A Fake quickly circled the field as Smoken Up reached the lead around the home bend.

Sustaining a strong sprint, the nine-year-old staved off a late challenge from Monkey King to complete a two-and-a-half metre win and claim immortality.

Smoken Up battled on bravely to be three metres away third.

Rating 1:53.6 over 2300 metres, Blacks A Fake became the Inter Dominion’s most successful competitor, having previously shared the mantle with Our Sir Vancelot.

Our Sir Vancelot became the inaugural triple winner thanks to his triumphs in Tasmania, South Australia and New Zealand.

Blacks A Fake also became the first nine-year-old to secure the Final since Chamfer Star in 1960 when the series was also held at Harold Park.

Ironically, the previous nine-year-old Inter champ was Caduceus when he scored at Harold Park in 1960!

HOOFNOTE: Alta Orlando, which was runner-up during the two opening rounds, is the only nine-year-old in this year’s Inter Dominion.