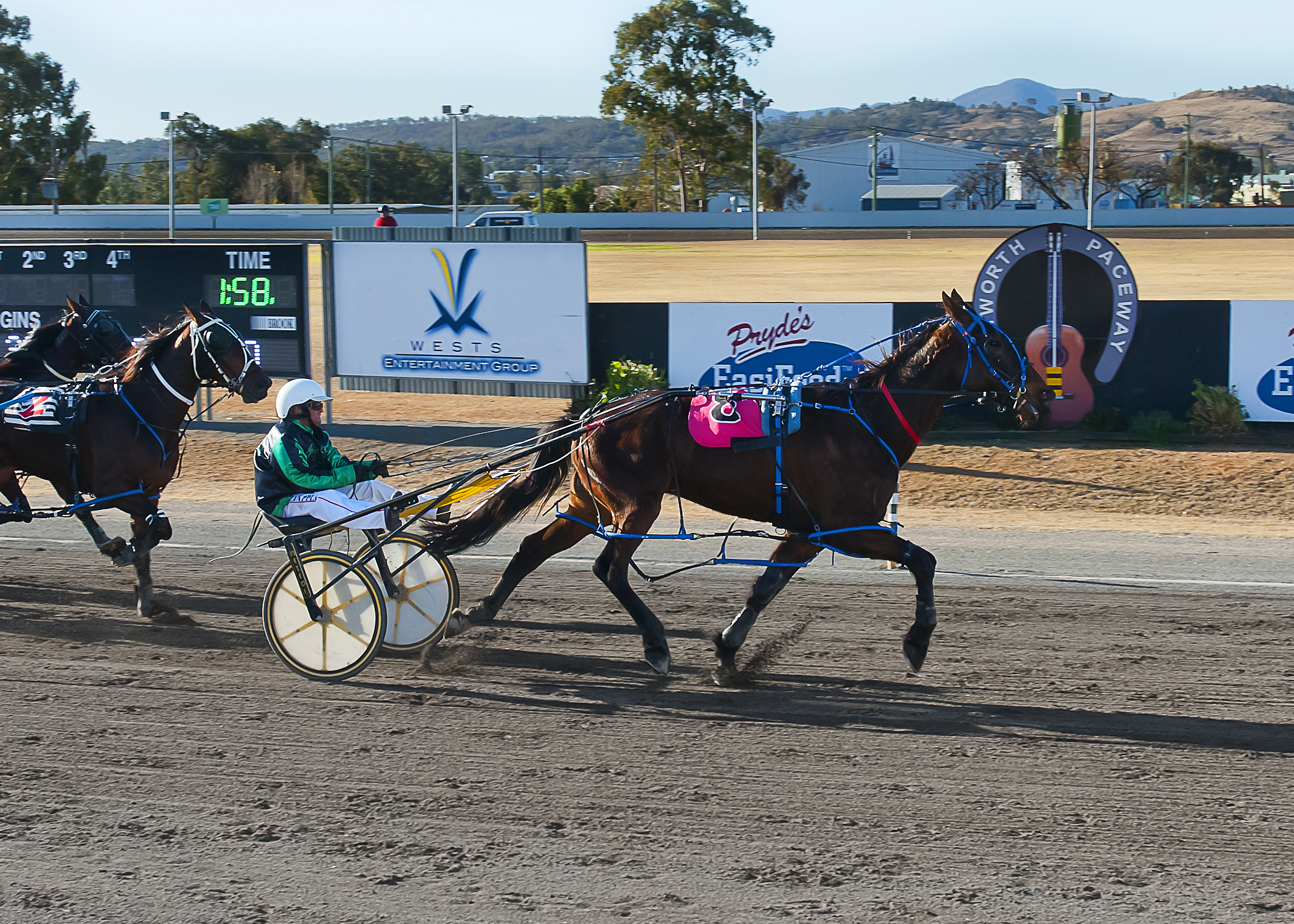 Tamworth29
“IT HAS eluded me as a trainer . . . but both my horses are consistent.” Those were the words from Moonbi trainer Dean...

“IT HAS eluded me as a trainer . . . but both my horses are consistent.”

Those were the words from Moonbi trainer Dean Chapple, who has two runners engaged in the Pub Group Gold Nugget at Tamworth Paceway tonight.

The $10,000 race carries a gold nugget as the trophy – something Chapple has seen first-hand after winning the 2012 running as a reinsman behind Churchill Bromac, trained by Robert Clement.

“We have got the barrier draws so let’s hope they can do the job,” Chapple said. “The race has drawn a good field and it is the first time I’ve had two runners in the race.”

Perfect barrier draws for his runners Kudos Bert and Right On With It, Chapple has engaged a reinsman who also has won the race before, which should prove an added bonus.

Chapple will drive Right On With It from the two barrier while Anthony Varga will handle the reins behind Kudos Bert from the three barrier.

Varga won the race in 2011 behind the Anthony Mabbott-trained Any Cause.

It will be the first time Varga has driven Kudos Bert – with the Always A Virgin gelding owned locally by George Simpson and his son Glenn.

“Anthony will suit the horse as he needs to be driven hard and Anthony is an aggressive driver,” Chapple said. “He has won a Nugget race before with Any Cause and it was a no brainer to put him on my horse.”

Chapple has a nice opinion of Right On With It:

“He is a consistent horse and has good gate speed,” Chapple said.

“I would like to tuck him away nice and quiet in the race while the fireworks go off at the beginning and then come home with him.

“He is the family favourite around here and the owners have been with me for more than 25 years.”

Tonight is the first night of the Tamworth HRC January racing carnival with heats of the Multiquip Golden Guitar on Sunday evening with the big finals’ night on Thursday January 23.

“There are a lot of seasoned runners in the race and I think she has a bright future but it’s just good to get her owner Norm Vincent back into the game,” Chapple said.

“I have been having a dry spell with the winners so I hope the Carnival can turn that around for me.”

HOOFNOTE: The last 10 runnings of the Pub Group Gold Nugget has seen the race won by 10 different trainers and 10 different drivers. Maybe Dean Chapple and Anthony Varga can change that trend!

It’s another ‘Famous Five’ for I...
Hart sticks with Delightful Dude
YOUNG’S CLOCKING UP THE ‘K’S’
Ziggy ready to rock the Golden Guitar
About author