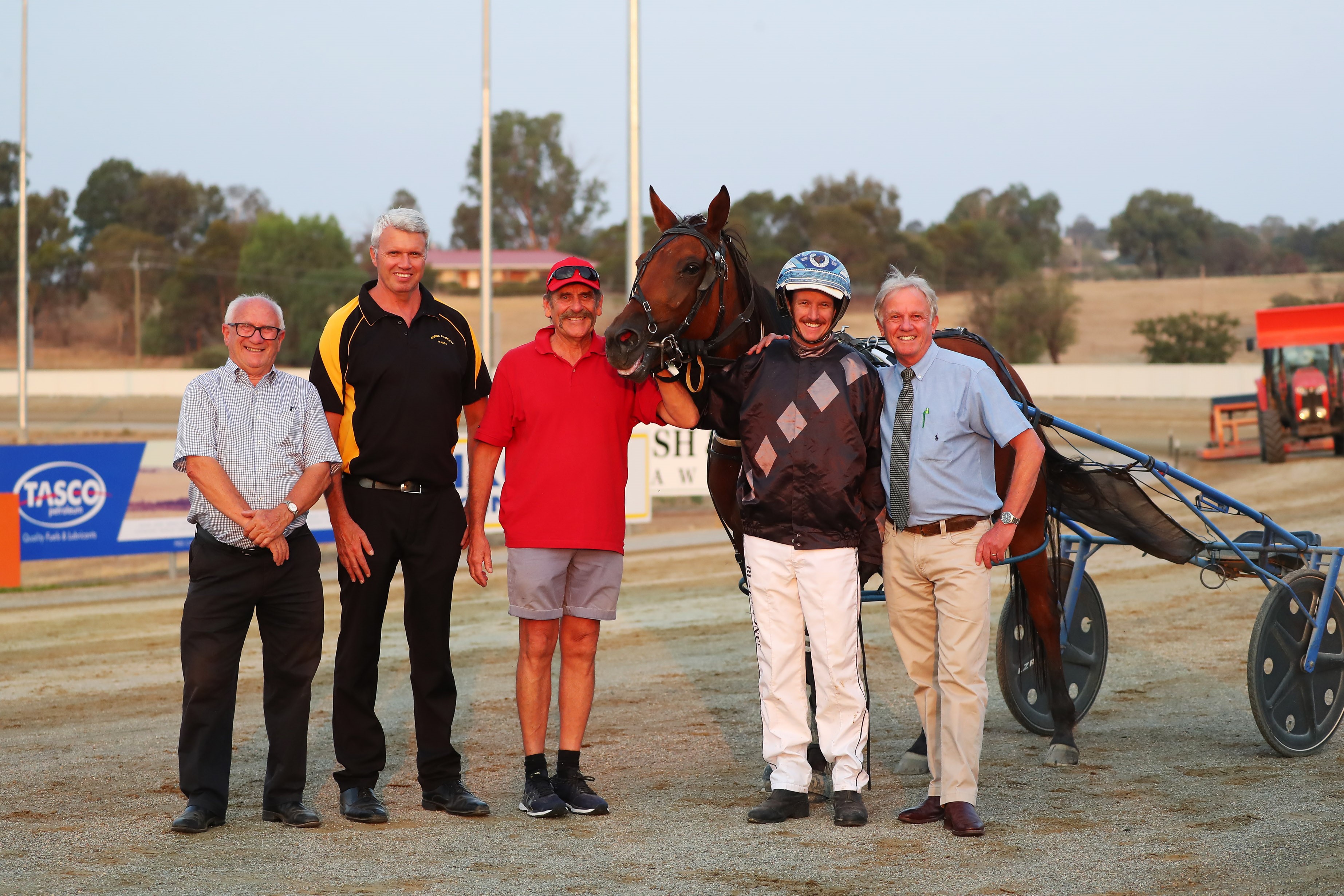 Glamors Symbol and a presentation to retiring racecaller Allan Hull

It was a special moment for Slick Blaster’s trainer-driver Bruce Harpley to win the final race called at Wagga by broadcaster Allan Hull, who retired after 50 years.

“I was proud to give him a salute and thank him – he has been  a great caller,” Harpley said.

Hull often refers to Harpley as the “Junee postman” and he didn’t let the opportunity pass him by as Slick Blaster returned to winning form at his third start back in his three-year-old campaign.

Slick Blaster is raced by some of Harpley’s long-time clients and he believes the gelding will keep improving.

“He has got raw talent and speed and it will just take him a bit of time to learn it all,” Harpley said.

“He has the makings of a good horse – a nice stride and a good heart-rate.”

Slick Blaster will next race in the final at Menangle on January 25, while Dancelikeangel will contest the fillies’ decider for trainer-driver Brad Hewitt, who has a strong winning strike-rate at Wagga.

Dancelikeangel won as a two-year-old and was having her second start back from a break when she claimed her second victory as a three-year-old on Tuesday.

She took advantage of the sprint lane bursting through on the inside to grab the second favorite Gee Gee Blinxs, who was having her first start since April.

Meanwhile, leading reinsman Blake Jones had a night o remember with three winners, including the one he thought he could win named after Allan Hull.

Jones won that race with the Paul Kahlefeldt owned and trained Glamors Symbol, who also took an inside run to edge out Sophie Stening by a head.

“I told Allan I would win his race and I was pleased to do it,” Jones said.

The premiership-winning reinsman also took out the opening race courtesy of Chain Reaction and also won with Bita Banta for Kim Hillier.

Chain Reaction and Rewards series final winner, The Cheddarnator, are both prepared by David Kennedy.

“I bought The Cheddarnator as a two-year-old and he is starting to go well,” Kennedy said.

The speedster of the night turned out to be Moreau Drive for trainer Hellen Scott and reinsman James McPherson.

McPherson is making strong progress in the driving ranks and gaining more outside opportunities from trainers.

He is high up in the Wagga premiership, which is again led by Jones.

Other winners on the night were Hard To Love for leading thoroughbred trainer Trevor Sutherland and Matthew Harrington, while Missing A Bolt cleared out late for his trainer Rob Garrett and driver, Bayley Duck.