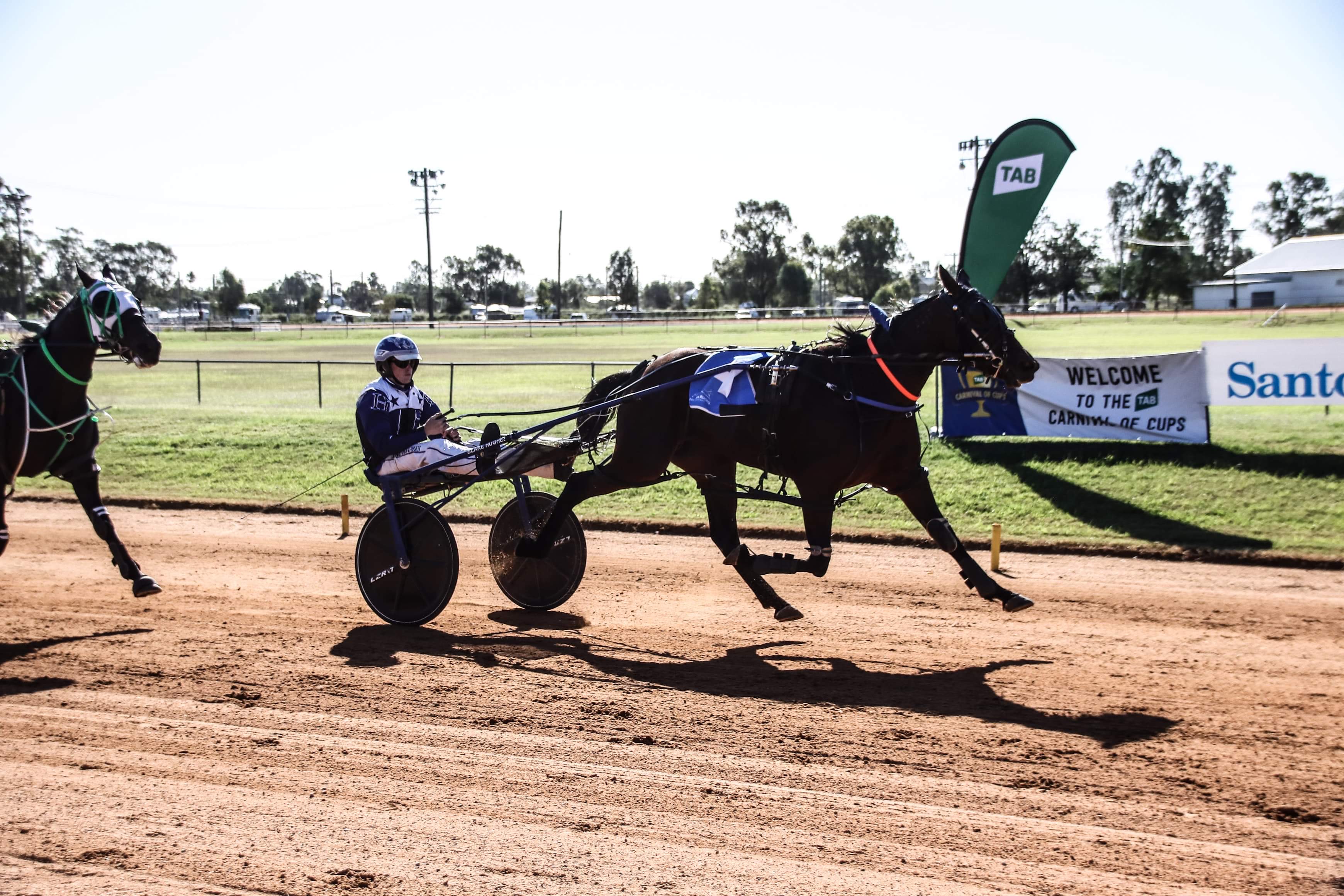 TOO GOOD: Handwriter adds to a great day out for Blake Hughes and Tony Missen. PHOTO: Coffee Photography

TAMWORTH trainer Tony Missen and young reinsman Blake Hughes, who accepted the drives for the stable, made an impressive combination at last week’s Narrabri Carnival of Cups meeting in taking out two of the feature races on the program.

The duo had success with Hand Writer and I’m So Better.

“She had enough gate speed to hold her own,” said Hughes of the four-year-old Sportswriter-Perfect Katie mare.

Beginning from the four barrier, Hughes went straight to the lead before being joined by Feel The Spirit (Tom Ison) racing out in the breeze.

“Once we got to the top, we got a bit of a breather,” said Hughes.

“Feel The Spirit came up really quickly looking for the lead”

“But once I had an easy first 400 metres, I thought I might as well hold the lead.”

Hand Writer led the field throughout in the 1760 metre race with Hughes electing to skip away from the field and go on for a 4.7 metre win over stablemate In A Lucky Place (Madi Young) and Dreamouts Niece (Lola Weidemann) 5.4 metres away third.

Tony Missen fondly remembered the strong association the late John Dean held with the Narrabri Club as a past president and committeeman.

“John was a stalwart of the club,” said Missen.

“I can still hear his voice saying ‘bring them up now drivers’ – he didn’t need a microphone.”

Missen and Hughes were back on the winner’s podium after picking up their second Final with the win of I’m So Better in the $11,000 Santos Cup.

Coming from the 10 barrier Hughes found himself at the tail of the field before electing to race around the field and sitting up outside race leader Mac Stubborn.

“I dropped back to one out five back after the start and then took off coming into the home straight the first time,” said Hughes

“As soon as I saw them back off the speed up the front I went as she likes to do it tough in her runs.

“Once we got outside the leader (Mac Stubborn), we got a good breather and she was just too strong for them on the line.”

With Mac Stubborn dictating the race tempo out in the lead the run down the 135-metre-long home straight on the final occasion and the two pacers locked in a heavy battle going stride for stride I’m So Better snatched the win on the line.

“Mac Stubborn goes pretty good and was still kicking back and even at the finish he had another go at us,” added Hughes

I’m So Better held a half neck win over the Anthony Varga trained and driven Mac Stubborn and Akuma (Caitlin McElhinney) 3.5 metres away third.

For Hughes – who had his first competitive race drive on the Narrabri Paceway on Easter Monday – the young reinsman headed back to Tamworth with a pleasing tally of four wins – two if which were feature races – a second and two thirds from 10 drives.

“I don’t mind the Narrabri track and it was good to get a couple of winners on a big day like today and of course to drive the winners for Misso.”