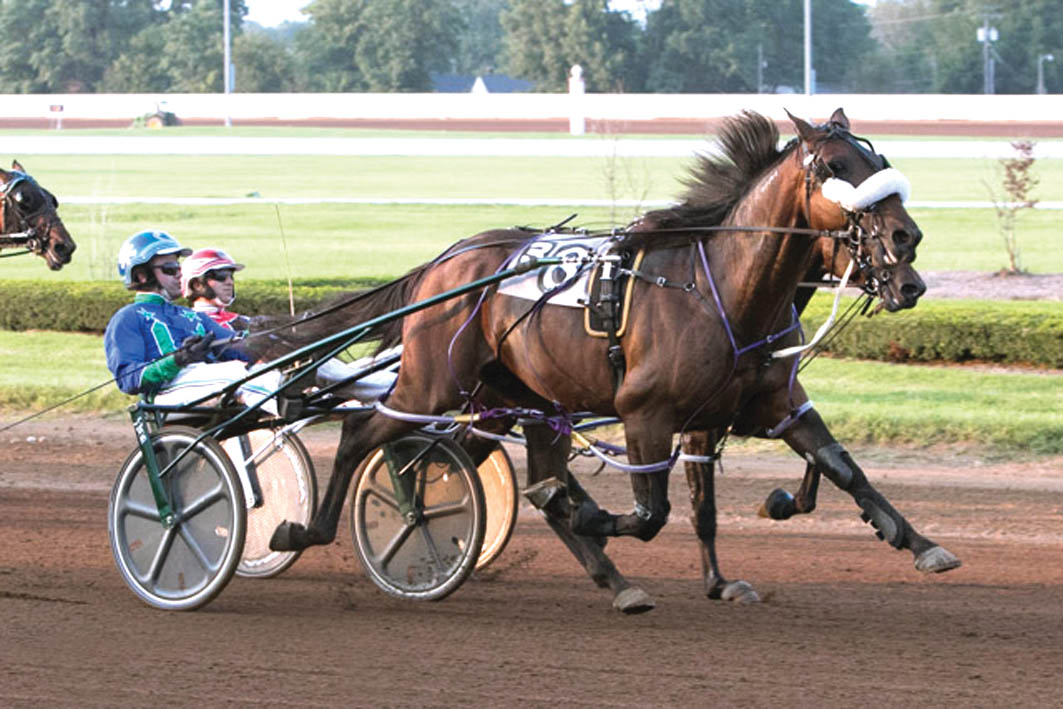 HURRIKANE EMPEROR provided an upset in the $250,000 Graduate Series final for four-year-old pacers while 1-5 favorite Gimpanzee took care of business in the...

Hurrikane Emperor, sent off as the fifth choice at odds of 7-1, was second over in fourth at three-quarters before coming three wide off the last turn and storming through the stretch to reign by a length over Workin Ona Mystery in 1:47, the fastest mile of the season. Dancin Lou finished third. Favorite Bettor’s Wish was eighth.

“I really thought he was going to be awesome tonight and Mark gave him the most beautiful drive in the world,” McDermott said. “It worked out beautifully.”

Hurrikane Emperor is a homebred son of former McDermott standout Hurrikane Kingcole, who died last October at the age of 10. Hurrikane Emperor won seven of nine races as a two-year-old and opened his three-year-old campaign with three consecutive wins, including the New Jersey Sire Stakes championship, before seeing his season derailed by sickness.

“We don’t know what it was, but everything just kept falling apart,” McDermott said. “I shut him down. My boys were so great about it, they told me to give him all the timehe needed. We did and it’s paid off.”

Hurrikane Emperor won a conditioned race in March before the sport was shut down because of the COVID-19 pandemic. When racing resumed, he returned in the Graduate Series,where he won an opening-round division at Tioga Downs. He finished third in his second-round division last week at The Meadowlands.

“This is beyond words,” McDermott said. “Through this pandemic it’s been such torture, all I did was go deeper in the hole. Thank God for my great partners that have supportedme through it because it has not been easy. To come out here, I knew he was awesome this year. Last week we were all slightly disappointed, but the way he got sick last year, I’m trying to not overuse him.

“This is just really a blessing. He is so special to us. Owning his daddy, losing his daddy last year, he’s family. He’s the greatest creature in the world to me. It’s funny, as a two and three-year-old he didn’t remind me of his father because he was really nondescript and didn’t have much of a personality. In the last year, he’s grown into such a clown that he’s so much like his dad off the track. On the track, he’s nice and manageable.”

In the Graduate Series final for 4-year-old trotters, Gimpanzee saw Reign Of Honor lead the field around the first turn but moved to the front at the quarter on his way toa 1:50.4 triumph for driver Brian Sears and trainer Marcus Melander. Reign Of Honor, also trained by Melander, was second and Chin Chin Hall finished third. The winning margin was one length.

Gimpanzee, a son of Chapter Seven out of Steamy Windows, is three-for-three this year and has won 20 of 26 races. A Dan Patch Award winner at age 2, the stallion has banked$1.89 million for owners Courant Inc. and S R F Stable.

“Reign Of Honor finishing second from a bad post (10) was a little bit shocking that he was so fast behind the gate,” Melander said. “Gimpanzee was supposed to win, but finishingfirst and second, I’m very pleased.

“(Gimpanzee) is doing what he’s supposed to do. He’s going to go back next week for the Hambletonian Maturity, so it was nice to get a nice race on the lead. I was very happywith what I saw. The horse is getting more in form. Even though he’s been racing great, I can feel him getting sharper and sharper. It will be very exciting to continue racing with him.”

The W.N. Reynolds Memorial divisions for three-year-old male trotters were won by Jula Trix Treasure and Back Of The Neck, both from the stable of trainer Ake Svanstedt. Jula TrixTreasure, driven by Gingras, won in 1:51.2, with Beads second and EL Ideal third. Back Of The Neck, with Scott Zeron in the sulky, won in 1:52 with Play Trix On Me second and Maesteraemon third.

The only Reynolds event for three-year-old female trotters was won by Takter-trained and Gingras-driven Sorella in 1:50.2, the fastest mile of the season by a three-year-old trotter.Panem was second followed by returning Dan Patch Award winner Ramona Hill in her 2020 debut.

Blue Riband before title defence
GAVIN LANG: A tribute from John Dunne
Blake gears up for a big night
Highly-successful partnership comes to an end
About author