A MINOR setback has ruled out the highly-anticipated clash between Victoria’s two buzz pacers taking place in Shepparton next weekend. With their respective trainers...

A MINOR setback has ruled out the highly-anticipated clash between Victoria’s two buzz pacers taking place in Shepparton next weekend.

With their respective trainers citing Saturday night’s provincial meeting as a suitable option, enthusiasts were exciting by the prospect of Ride High and Lochinvar Art battling over 1690 metres.

Driven by Kima Frenning, the ‘Delacombe Destroyer’ rated a phenomenal 1:49 over 1650 metres. 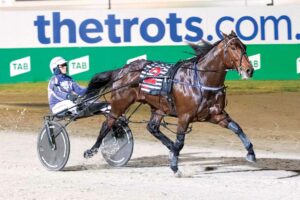 Successful when first-up from a spell a fortnight ago, Lochinvar Art contest the open class event in Ballarat last night for trainer David Moran.

To Moran’s dismay, the son of Modern Art was beaten – finishing third – as a $1.10 favourite.

“He just didn’t feel good at any stage of the race,” Moran said. “I had to urge him to find the lead and he just never travelled well.

“I had a bad feeling at the bell and knew he wasn’t at his best, but to battle on to finish third like he did proves he has plenty of ticker.”

Stood down pending a vet certificate, Lochinvar Art was examined this morning, with early indications the four-year-old is suffering from a low grade respiratory virus.

“He’s good within himself this morning, which is great to see,” Moran said. “He has a minor respiratory virus but I have to wait for his bloods to come back this afternoon or tomorrow to know anything else.

“I was up in the air waiting for results to decide on next week, but I suppose it is off now.

“Even if got I him to the race and then he had a hard run it could fry him which I’m not willing to do.

“I will give him a few days off and then start again.”