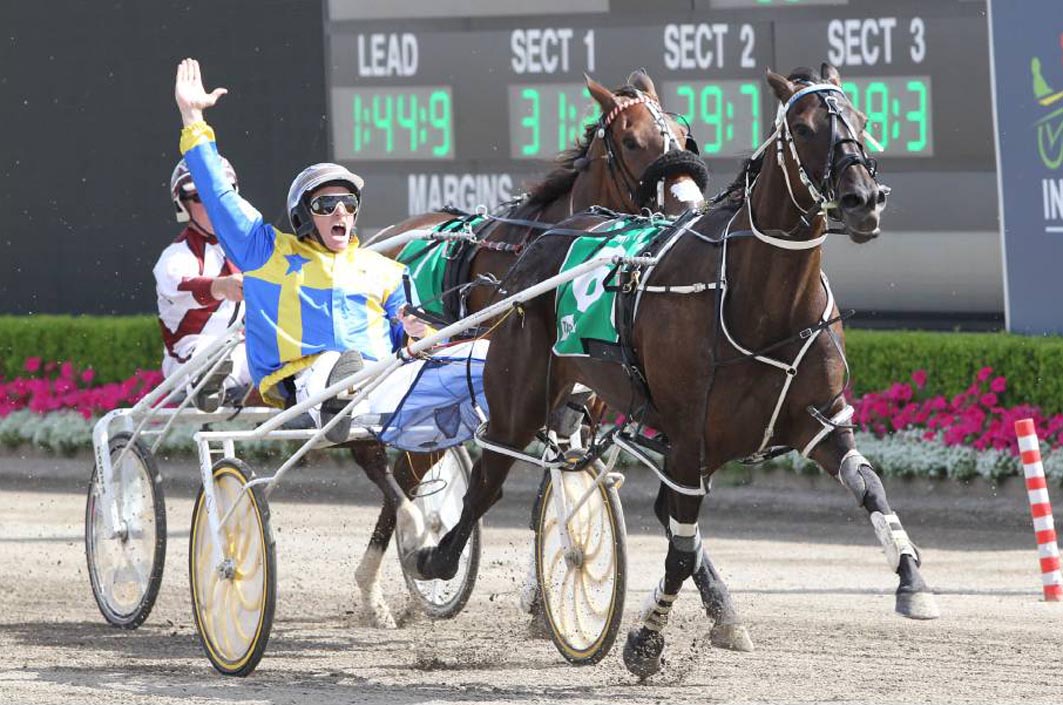 Records are made to be broken

WHEN Our Sir Vancelot became a triple Inter Dominion winner it was considered a record destined never to be broken.

Afterall, only two pacers had managed consecutive wins since the Championship was inaugurated in 1936.

Hondo Grattan was the first in 1973 and ’74, with Gammalite following suit a decade later.

Our Sir Vancelot created history for master horseman Brian Hancock with his victories in 1997, ’98 and ’99.

The following year Im Themightyquinn won the first of his three Finals, with the third coming at Club Menangle in 2013.

As for Menangle, the series was the first of three consecutive Inter Dominions the Club was set to hold after a new hosting roster was announced by the ID Council, which required a jurisdiction to conduct the series in three-year blocks!

NIGHT ONE
In an Inter Dominion first, the New South Wales Harness Racing Club hosted the series, but staged heats across Australasia on the same night – February 16.

In west, defending champion Im Themightyquinn proved he was in perfect shape for his title defence when he completed an arrogant 24-and-a-half metre win.

The son of Washington Vc rated a brilliant 1:54.7 over 2536 metres as Mysta Magical Mach and Dasher Vc filled the placings.

It was a much tighter finish in Victoria, with Caribbean Blaster scoring by a half-neck from Keayang Cullen, with Jaccka Clive a half-neck away third.

At Club Menangle leading local couple Belinda and Luke McCarthy struck first blood when Excel Stride worked to the lead from barrier three on his way to a win over Pub Blitz and Chariot King.

The son of Aces N Sevens rated 1:55.6 over 2400 metres, with his time seven-tenths of a second quicker than Kiwi raider, Mah Sish, winning the following heat.

Prepared by Tim Butt and driven by his brother, Anthony, Mah Sish accounted for Mach Alert and Devil Dodger.

FINAL
Along with the various winners, heat placegetters and a pair of ‘wildcards’ were granted entry into the Group One at Club Menangle on March 3.

Lincoln Royal was scratched, giving the emergency, Devil Dodger, the opportunity to take his position in the elite field.

Although drawn wide in barriers six and seven, ImThemightyquinn and Terror To Love were joint favourites at $3.20, with Mah Sish at $6.60 and Caribbean Blaster at $7.50 the only other runners under double figures.

Chariot King began brilliantly to lead from barrier four before being eased to take a trail behind Mah Sish, leaving Terror To Love and Im Themightyquinn to settle towards the tail of the field.

Terror To Love was soon sent aroung the pack to sit in the ‘death seat’ as Im Themightyquinn remained last at the bell.

Gaining a three-wide trail along the back straight, Im Themightyquinn was forced four-deep around the home bend before sprinting to a four-metre win from Mah Sish.

Excel Stride was a half-neck away third.

A minor cloud dampened Junior’s moment of glory, with stewards fining him twice for unaceptable whip use.