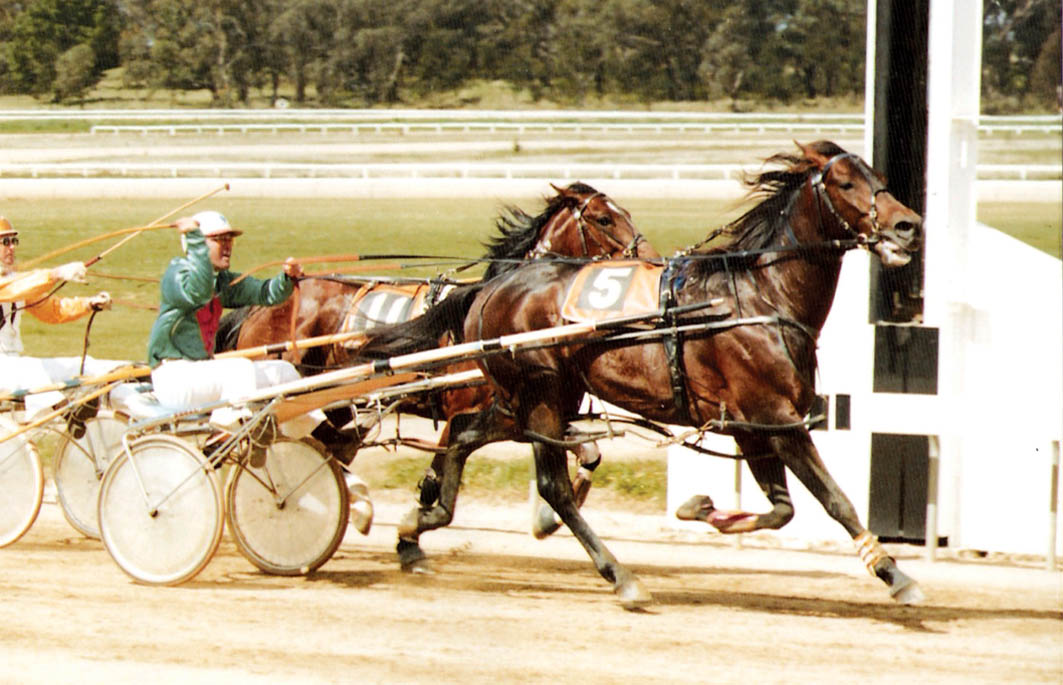 AS WE continue to marvel in the heroics from the opening round of Inter Dominion heats at Club Menangle during the weekend, let’s take...

AS WE continue to marvel in the heroics from the opening round of Inter Dominion heats at Club Menangle during the weekend, let’s take another step back in time to relive the glory of the 1980 Championship at Harold Park.

SOME 79 horses were nominated for the BP-sponsored Inter Dominion after first forfeits, which were held during March.

Of those, three were allocated the back[1]ark of 15 metres for the series – champion veteran Paleface Adios, Young Quinn and Pure Steel.

Leading up to the Inter Dominion, Paleface Adios became the first horse in Australia to win 100 races, when successful in the Cranbourne Cup.

Trainer Colin Pike, at this point, wasn’t sure whether he would run his champ in the series.

The NSW Trotting Club offered $240,000 in stakes throughout the pacing carnival, with record turnover and one of the biggest Final crowds capping a memorable series.

NSW Trotting Handicapper Kevin Pascoe reduced the final acceptance list from 74 to 40, with the list containing a record number of interstaters and New Zealanders converging on Harold Park.

On the first night of the series, 17,101 people packed into Harold Park to watch some of the future champions of the sport do battle.

Koala King didn’t begin the series on the best note, getting shuffled well back in his heat before flashing home for fourth behind Double Agent, which led throughout for top reinsman, Vic Frost.

Double Agent ran his last half in 58.4 seconds to defeat Miracle Mile winner Locarno by a metre, with outsider Loyal Lord third.

Locarno, which at one point was giving Double Agent six lengths in the back straight, was privately clocked to run his last half in 57.2 seconds.

Brian Hancock had Koala King away well enough in the heat, however, was shuffled back to last with a lap remaining before storming home over the concluding stages.

Lehigh Lad, showing brilliant manners, won the first heat after finding the front and the favourite was all but home after that.

Despite being strongly challenged in the straight, Lehigh Lad, with Richard Hancock in the sulky, Lehigh Lad held on to beat Ragtime Boy by a half-head, with Lone Boy a similar margin away third.

The time of 2:31.6 was a track record for the distance from a standing start.

Frosty Imp had to overcome early interference before circling the field to sit outside the leader amd battling on gamely to be second, seven metres from ‘Paleface’.

Lea Sands, which sat behind the leader, was third.

Pure Steel, racing midfield with a hectic tempo being set by Chime Bay and Opalite, toughed it out to hit the front at the top of the straight and race to an impressive six-metre win over Lord Module, with Opalite a head away third.

His winning time was just two-tenths outside Lehigh Lad’s new mark set earlier in the evening.

Such was the authority of Pure Steel’s performance his price to win the Final was shortened into 5-2 favourite.

Racing outside the leader in the fifth heat, driver Ted Demmler didn’t panic despite a brisk pace being set by Lone Boy, with the pair eventually overhauling the frontrunner in the shadows of the post.

Also holding out the finishing burst of Frosty Imp, Pure Steel rated 2:03.8 for the 2350 metres – clearly the fastest rate of the night.

Locarno circled the majority of the field in the final lap to beat Lea Sands and Lord Module in 2:07.5.

Lehigh Lad led in his heat and did it easily to hold out Cunning Lad and Gay Hondo in 2:06.7.

Koala King, meanwhile, was in a stack of trouble in the series.

The multiple Grand Circuit winner was again well back, and although Hancock drove a superb race to grab fourth behind Canis Minor, it left him in a must-win situation heading into night three.

The series was thrown into temporary chaos after it was discovered Pure Steel’s swab from the opening night had returned a “foreign substance”.

Polyoxyethlated vegetable oil was detected in the swab.

An injection of E-SE was given to Pure Steel after the Miracle Mile, however, it wasn’t administered properly, allowing some of the substance to remain in the horse’s system for longer than anticipated.

The drama didn’t seem to deter the horse or owners, the Roberts family, with Demmler again guiding the superstar to victory in front of 20,465 people.

Making a clean sweep of the qualifiers, Pure Steel rated 2:07.9 to Single Again, which led, with Locarno third.

Koala King and Hancock left nothing to chance in their heat, sweeping around the field and ensuring their spot in the Final with an impressive five-metre defeat of Frosty Imp and Local Motive.

The sensation to come out of this heat was an inquiry into the performance of Lehigh Lad and the driving tactics adopted by Richard Hancock.

Settling back on the fence, the pair eventually finished eighth.

Lord Module rocketed back into the winning chances when he beat Brad Adios in heat nine in a time of 3:59.2.

Meanwhile, Paleface Adios took out the other qualifier, beating pacemaker Bad Luck in a time of 4:01.5. Lone Boy was third.

A massive 33,820 people packed Harold Park’s famous Glebe circuit for the 1980 Inter Dominion Final in what was the biggest crowd since the 1960 Inter Final.

It is said the meeting, which comprised seven races including the $130,000 Final, produced world record turnover of approximately $4.7million.

Koala King, the Grand Circuit champion, gave 32-year-old Brian Hancock his first Inter Dominion when producing a whirlwind finish from back in the field.

Trapped midfield on the rails, Hancock was able to ease away from the fence to follow Locarno, which held the one-one trail.

Up front, Frosty Imp led for Robinson while Lone Boy sat in the ‘death’ and Lehigh Lad enjoyed the run behind the pacemaker.

Paleface Adios was three-back on the fence, just in front of Hancock, with Demmler pushing Pure Steel three-wide for a run at the leaders over the concluding stages.

Koala King, enjoying the run on the back of Locarno now, stayed in, realising that the New Zealander would sprint hard for the last quarter, with only luck required to avoid being pocketed by Pure Steel.

Beginning at 12-1, Koala King followed Locarno until the quarter before unleashing a devastating sprint when clear, racing to an emphatic 10-metre win over Locarno.

Pure Steel was gallant in defeat when third as the winner rated 2:05.4.