Planning to forego the drive behind her stable runner, Lola Montez, as late as last night, Gusman made a decision to partner the mare, which upstaged her stablemate and favourite, Shesalwaysdreaming.

Unplaced as the $1.80 shot with Chris Alford in the cart, Shesalwaysdreaming is Lola Montez’s older half-sister.

As for Gusman’s appearance at the track, it is her first public outing since her son, Bailey, was involved in a freak accident last week.

Hospitalised as a result, Bailey fell into a deep fire pit which caused severe burns to his body.

The 15-year-old will require multiple surgeries including skin grafts.

“I hadn’t left Bailey since he’s been in hospital and wasn’t going to drive today,” Gusman said. “Yesterday I even tried to call the stewards to swap drivers but couldn’t get through so I decided to take the drive.

“It’s been a hard few days with Bailey’s accident and pretty emotional considering he pretty much named this mare. 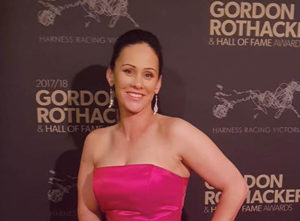 “Eventually Bruce Kennedy pointed out Lola Montez was a showgirl in the 1800s, so I went with the name.

“This win was for Bailey and hopefully brought a smile to his face.”

Beginning slowly from the pole, Lola Montez was settled two-back along the pegs as Wonderforce led from barrier five.

Shuffled to the tail of the field as Ears Ponder worked to the lead during the middle stages, the daughter of American Ideal was angled to the extreme outside around the final turn before sprinting to a two-and-a-half metre win from Ears Ponder, with Wonderforce eight-and-a-half metres away third.

“She was travelling so well down the back straight, but I wasn’t sure how the leaders were going,” Gusman said.

“When I asked her to go in the straight she really knuckled down and I was thrilled with the way she hit the line.”

Bred and owned by Gusman, Lola Montez rated 2:03.6 over 2180 metres to break her maiden at her fourth start, having filled the placings at her three previous attempts.