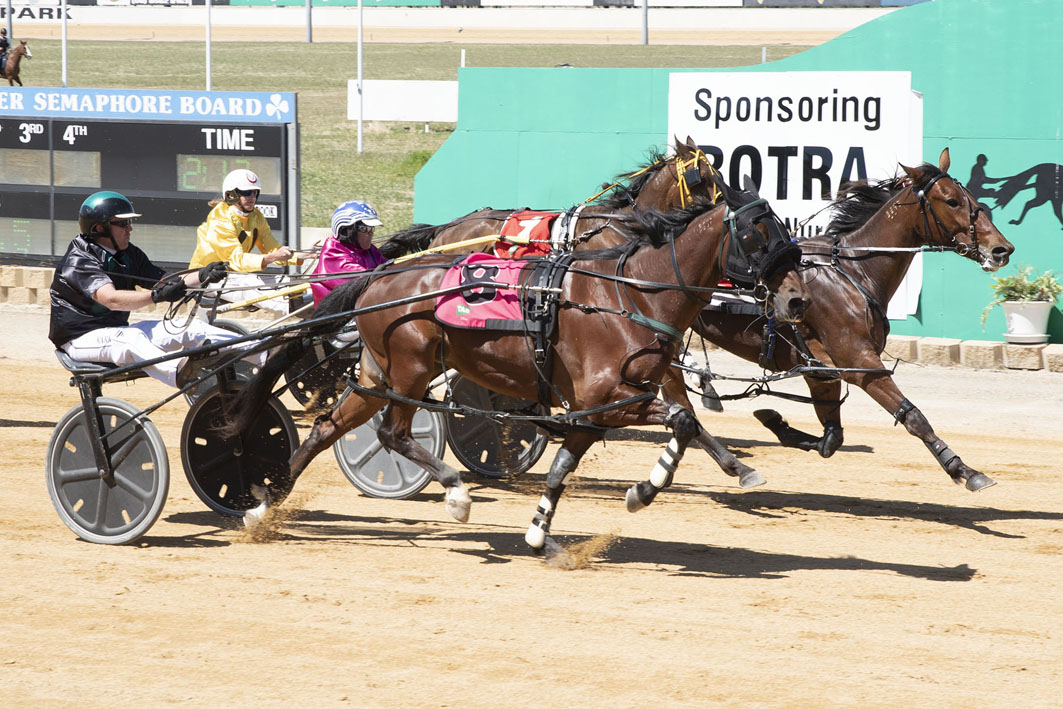 JOELITA, on the outside, made a successful racing debut at Globe Derby yesterday - Photo Walter Bulyga

A LONG arduous journey from Mount Gambier to Globe Derby was well worth it for Mark Phillips yesterday. Phillips undertook the 11-hour round trip...

A LONG arduous journey from Mount Gambier to Globe Derby was well worth it for Mark Phillips yesterday.

Phillips undertook the 11-hour round trip with Joelita, which was making her debut over 1800 metres.

To Phillips’ delight the daughter of Roll With Joe, which is trained by his father David, was successful, meaning the “hell of a long day” was not in vain.

“We left before five in the morning and got to Ray Holberton’s place about 11:30,” Phillips said. “That gave her time to have some lunch and a bit of a stretch before racing later in the afternoon.

“By the time we got home and put her away it was about 11pm when I walked in the door.

“It is a hell of a long day, but doesn’t feel so bad when you’ve come home with a win.”

With Phillips in the cart, Joelita was pushed through from the second row to gain the perfect one-one trail as Miki Steamed Home led and Just Chai worked overtime in the ‘death seat’.

Angled three-wide around the final bend, Joelita reached the front in the last stride to score by a short half-head from a gallant Just Chai.

Miki Steamed Home battled on to be two metres away third in 1:59.5.

“She took the whole straight to get there, but she put her nose in front at the right time,” Phillips said. “I’m very happy with her run and expect her to be better for the experience.”

Bred and owned by Phillips, the two-year-old is being readied for the Southern Cross, which begins with heats at the troubled venue on November 27.

“I have to thank the Lee family,” Phillips said. “They gave me her dam and she is my first foal from the broodmare.

“I’d like to give her another start before the Southern Cross heats, but only if I can find a suitable race close to home.

“I don’t want to be making too many long trips with her between now and the Southern Cross.”

Relishing life in the spotlight
Purple patch spans width of the nation
Your race-by-race guide to Tabcorp Park Menangle S...
From ‘Trainor’ to ‘trainer’...
About author