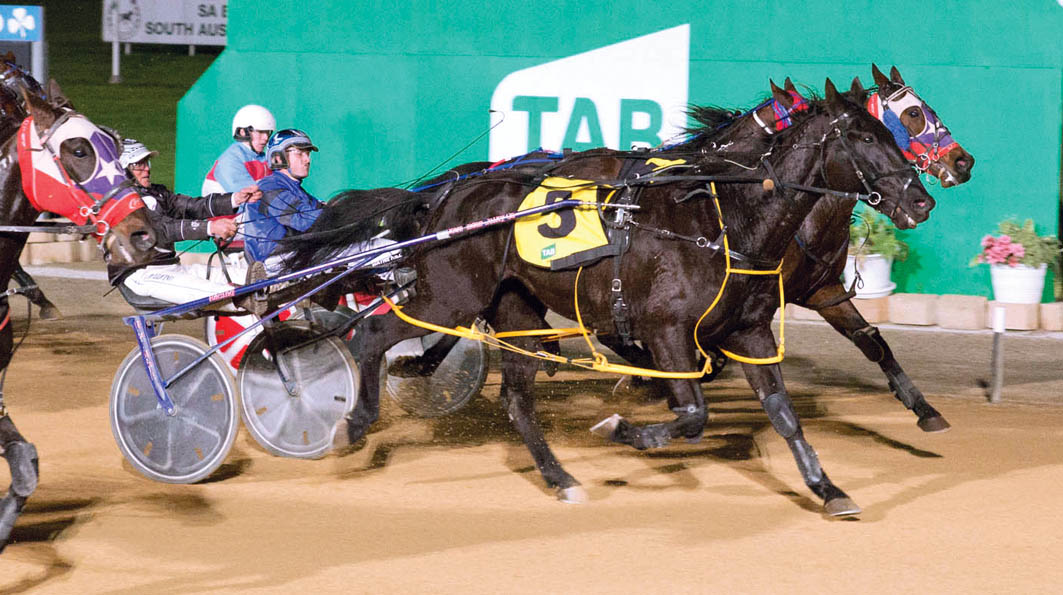 MAJOR TRUMP, on the outside, broke a long drought from the winners' circle last weekend - Photo Walter Bulyga

CONNECTIONS of veteran pacer Magic Trump hope the time span between his wins is considerably shorter than the previous gap. Winner at Globe Derby...

CONNECTIONS of veteran pacer Magic Trump hope the time span between his wins is considerably shorter than the previous gap.

Winner at Globe Derby last weekend, Magic Trump will return to the troubled venue on Saturday night in search of consecutive victories.

Before his latest triumph the 10-year-old had been absent from the winners’ circle for 33 months!

As for consecutive wins, the son of Trump Casino has only achieved the feat twice in 219 starts – in April 2013 and January 2014.

“It was fantastic to get that win from him,” trainer Phil Westbury said. “He was bitten by a King Brown snake right before Wayville in 2017 and it took nearly two years to get him right.

“He’s lucky to be alive, let alone racing and getting a win.

“I have to thank Kerry (Green) and Gaita (Pullicino) as they have been a wonderful help for me.”

Westbury explained Magic Trump’s win also served as a “welcome reason to smile” after enduring several health issues during the past year.

Preparing to have a knee operation last year, Westbury ended up being diagnosed with prostate cancer, which saw him go under the surgeon’s knife last December.

“It’s been a tough time lately and it was great to enjoy a win with him,” Westbury said. “The horses keep giving me a reason to get up in the morning.

“Early last year I planned to get my knees replaced, and prior to doing it, they had a query I might have cancer as a shadow showed up in one of the x-rays, so the surgeon told me to go and see a neurologist.

“Even though I’d been tested every year since turning 50 I had prostate cancer.

“I had the operation in December and got the all clear about a month ago.

“Then a few weeks ago I had one knee operated on and will have the other one done in October.”

As for his pending assignment, Major Trump will begin from two on the second row, with Pullicino to take the reins again.

“I prefer to have him off the back line, so I’m not concerned about the draw,” Westbury said. “He can’t be used up early, so from there he can just be slotted in somewhere.

“That’s what Gaita was able to do last week and it made a difference at the finish.”