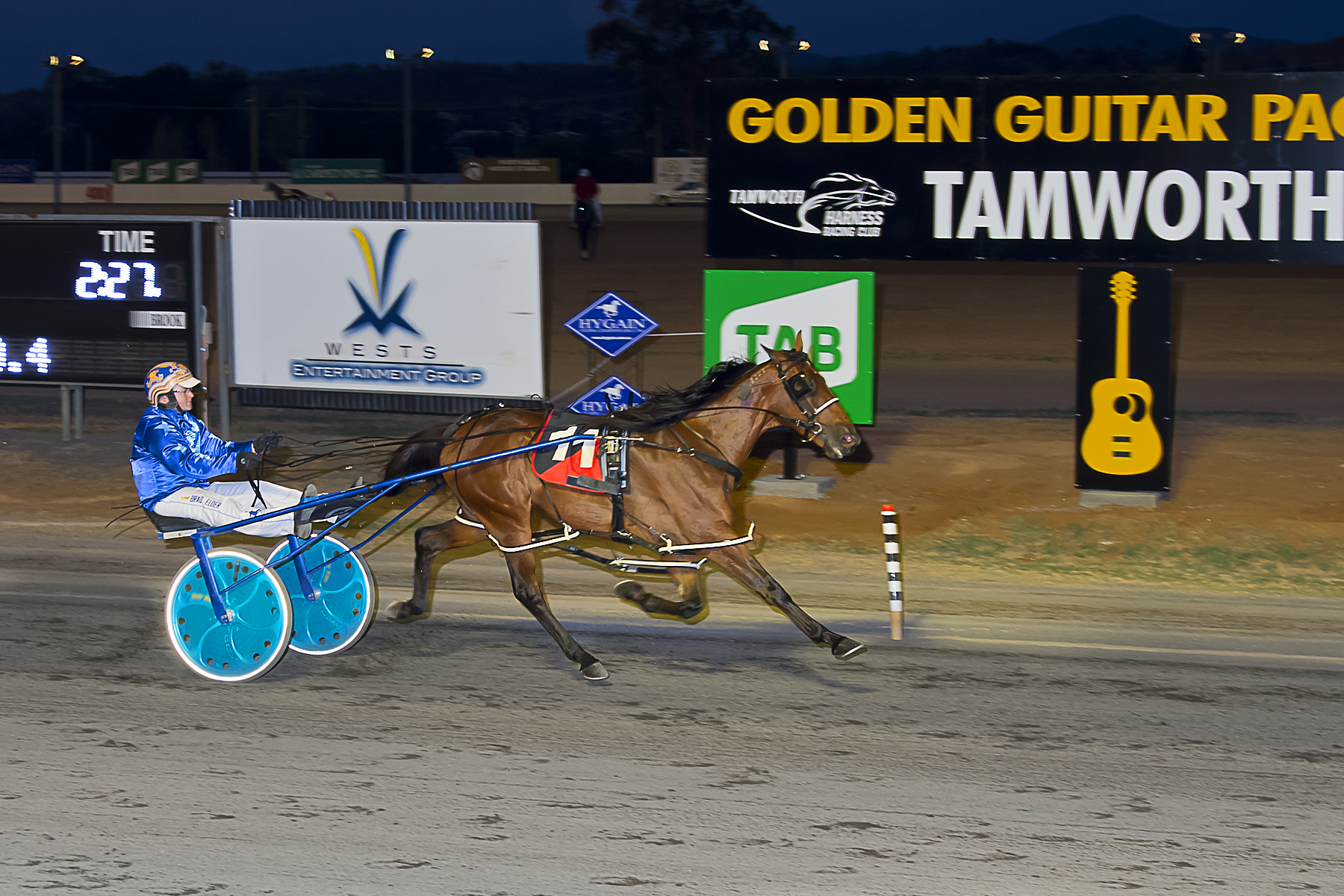 My Ultimate Star cruises to the line an impressive winner at Tamworth. PHOTO: Peter Mac Photography

Elder3 Tamworth21
MY ULTIMATE STAR earned favouritism for the $12,000 Hygain Star Maker Three-Year-Old Final on Sunday evening at Tamworth Paceway with an impressive display there...

MY ULTIMATE STAR earned favouritism for the $12,000 Hygain Star Maker Three-Year-Old Final on Sunday evening at Tamworth Paceway with an impressive display there on Wednesday night.

Trained by Jarrod Alchin at Menangle Park, it was Maitland reinsman Brad Elder who handled the Bettors Delight-The Crystal Star gelding in the Prelude at the mid-week Tamworth meeting.

“The most worrying part was the start because horses were going bush everywhere so I just sat four wide around the first turn to stay out of trouble,” said Elder.

My Ultimate Star came into the Star Maker Prelude resuming from a spell with the gelding’s last start a win in August, 2019 in the Group 2, $50,000 Australian Pacing Gold two-year-old Championship Pace at Albion Park in a 1.55.4 mile.

“I have never driven the horse before,” said Elder.

“But he is a beautiful going horse and doesn’t wear a boot . . . he is a true racehorse.

“When Paul (Diebert) on Dance Baby Dance put a bit of pace into the race that helped us a fair bit.

“Just coming to the bell, I popped him out and rolled him up to them.

“When I pulled the plugs, he found another gear and when I asked him to go, he just demolished them.”

My Ultimate Star went on for an 18-metre win over stablemate My Ultimate Bondi (Will Rixon) with He’s The Warrior (Tom Ison) 6.6 metres away third.

My Ultimate Star is raced by former Tamworth locals in Scott Whitton and Jodie Foster, who also contested the Hygain Starmaker Final in 2019 finishing second and third with My Ultimate Romeo and Our Ultimate Julie.

“I have to thank the owners for the drive – the horse has a pretty good strike rate so hopefully there is plenty more wins for him,” said Elder.

My Ultimate Star has now had 14 starts for six wins and four placings.

Part-owner Scott Whitton he is looking forward to the Final on Sunday evening at Paceway Tamworth.

“It’s great – we planned it ages ago to set the horses for Tamworth,” said Whitton.

“We haven’t won the final yet but everything is going to plan so far.”

TEARS OF JOY FOR SUTHERLAND
Ultimately, he’s just a Star
A gold nugget up for grabs
YOUNG’S CLOCKING UP THE ‘K’S’
About author