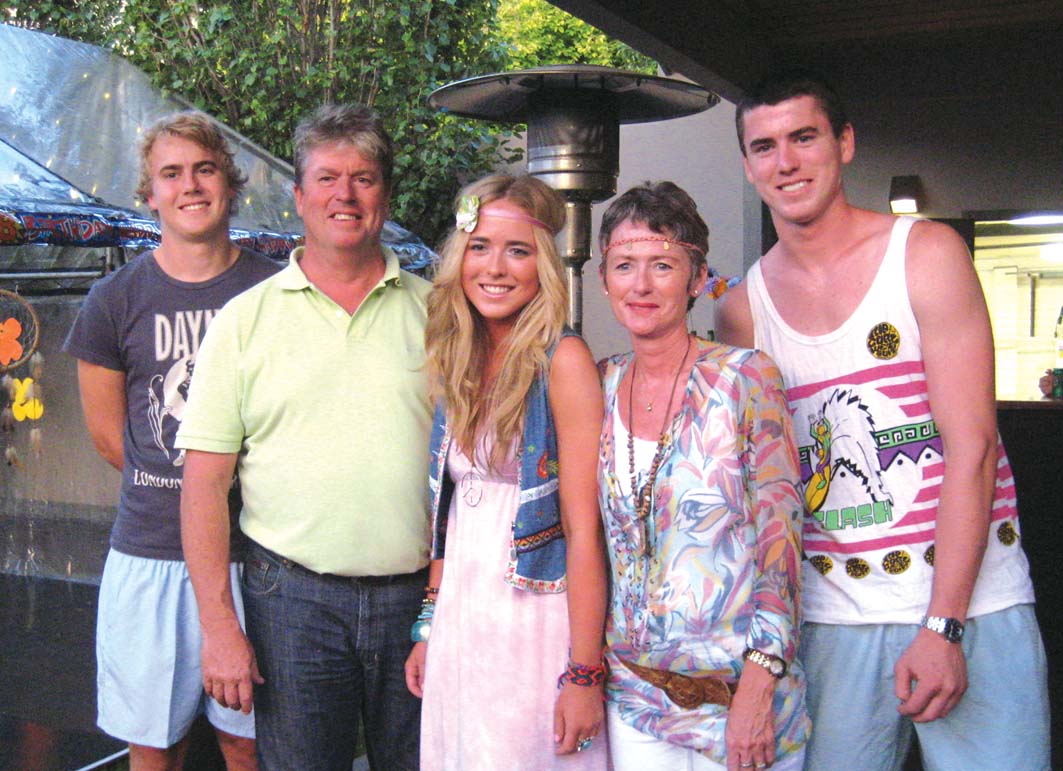 DUNCAN and LYN McPHERSON with their children

WITH the 2020 Teal Pants Campaign beginning today focus is directed at women’s health, particularly ovarian cancer. Initiated in 2014, the campaign has raised...

Initiated in 2014, the campaign has raised more than $2million since beginning in Victoria.

Since then Team Teal was expanded into New South Wales before going Australia-wide and into New Zealand.

This year almost 300 reinswomen will wear teal pants between February 1 and March 15 in a bid to raise awareness and valuable funds for the dreaded condition.

As such it is an ideal time to ‘run’ Paul Courts’ article first published on www.harnessnews.com.au in 2017 which focuses on the struggles of the late Lyn McPherson, her husband, Duncan, and their children.

It’s been a decade since Lyn lost her battle, but her legacy lives on.

LIKE most people, Duncan McPherson was happy within his own slice of world – a successful business, three great kids and a beautiful wife.

McPherson had a nice ordinary life until tragedy struck on March 8, 2010 when his wife, Lyn, lost her battle to ovarian cancer.

All of a sudden McPherson’s existence was thrown out of balance and into a certain degree of turmoil.

Sure, he had good friends and family around him, but the pain McPherson was fighting inside, especially when he was home alone, was taking its toll.

“When Lyn passed away I went from carer to losing my life partner and living a very silent existence,” McPherson explained. “I found it extremely difficult to find people to communicate it all with.

“Looking after our kids came first, but I struggled. After losing a life partner, the men get left behind and the support process isn’t there.”

That ignited part of McPherson’s transformation from ordinary to extraordinary.

Realising a void needed to be filled, McPherson contacted the Women’s Cancer Foundation – Ovarian Institute and offered his service as a counsellor for men.

“Drawing on my own experience, I wanted to assist men with the grieving process,” McPherson said. “I would be their cold call so they could have someone to talk to who fully understood what they were dealing with.

“I’ve been that cold call for quite a few men, with some even calling back after a period of time to tell me how much it helped.”

Along with helping men during the aftermath of tragedy, McPherson became active in the initial process involved with ovarian cancer.

McPherson’s focus is primarily based on the dire need for better awareness, services and early detection.

Again, it was McPherson’s own experiences with Lyn which are catalyst for his passion.

“She had what we now know are typical ovarian cancer markers such as bloating and sore stomach, and given her profession as a nurse and midwife, she had a feeling it was something serious and was becoming more frustrated as it got worse.

“When she got that diagnosis we got some fish and chips, a bottle of wine sat down and said ‘let’s work it out’ as we knew she was in a fair bit of trouble.

“She had major operations, blood transfusions, chemo and radiation, but lost her battle after 15 months.

“During that whole time she never complained a day…she was gracious the whole time and worried more about those around her.

“Sadly, the mortality rate among women diagnosed with ovarian cancer is so high, it is a silent killer, which is why I am so heavily involved, particularly in fundraising.”

Despite her own failing health, Lyn began fundraising as a way of increasing research and nurses to support those facing the same adversity.

“Receiving the Australia Day Honours was overpowering and terrible at the same time,” McPherson declared. “I didn’t, and don’t do it, for awards, it is all about my wife’s wishes.

“If we can assist in fundraising research to find an early detection device it would be a terrific result in improving the survival rate, which is minimal at this point.”

Long before Lyn’s passing, McPherson was a passionate harness racing participant – a purist with a devotion to trotters, which he shares with well-known industry supporter Michael Taranto.

Aware of McPherson’s two loves, Harness Racing Victoria suggested a heart-warming way of combining the pair in the name of charity.

“I got a phone call asking if I would be okay with the new race series for trotting mares being named after my wife and the Lyn McPherson Breed For Speed was launched,” McPherson said. “Naturally I said ‘yes’ as I was touched right in the heart and so honoured.

“It was then the job of Michael and I to tie the ovarian cancer fundraising to the series.”

Hence, the Teal Pants program was born, with reinswomen in Victoria earning a set amount for the cause with every win.

Growing in stature to also include New South Wales, the Teal Pants ‘drive’ has gone national with the help of Harness Racing Australia this season, with every reinswomen in Australia raising money with each triumph between February 1 and March 11 – Lyn McPherson Breed For Speed night at Melton.

“To have each state embracing the Teal Pants concept is amazing,” McPherson said. “It goes further than just raising money, which is needed to research and care, it lifts the awareness of ovarian cancer as well.

“During the last week or so we’ve been hearing and seeing a lot about AFL’s Women’s League, and even the women’s 20/20 cricket, but the women of harness racing have been leading the way in sport for a long time.

“Thanks to all the reinswomen jumping on board with the help of administrators, my wife’s wish is continuing to come true.”

Rees fires a shot over Bathurst’s big guns
Ginger to dance her way to glory
Primed and ready for another upset
Squaregaiter to follow lucrative country cups circ...
About author