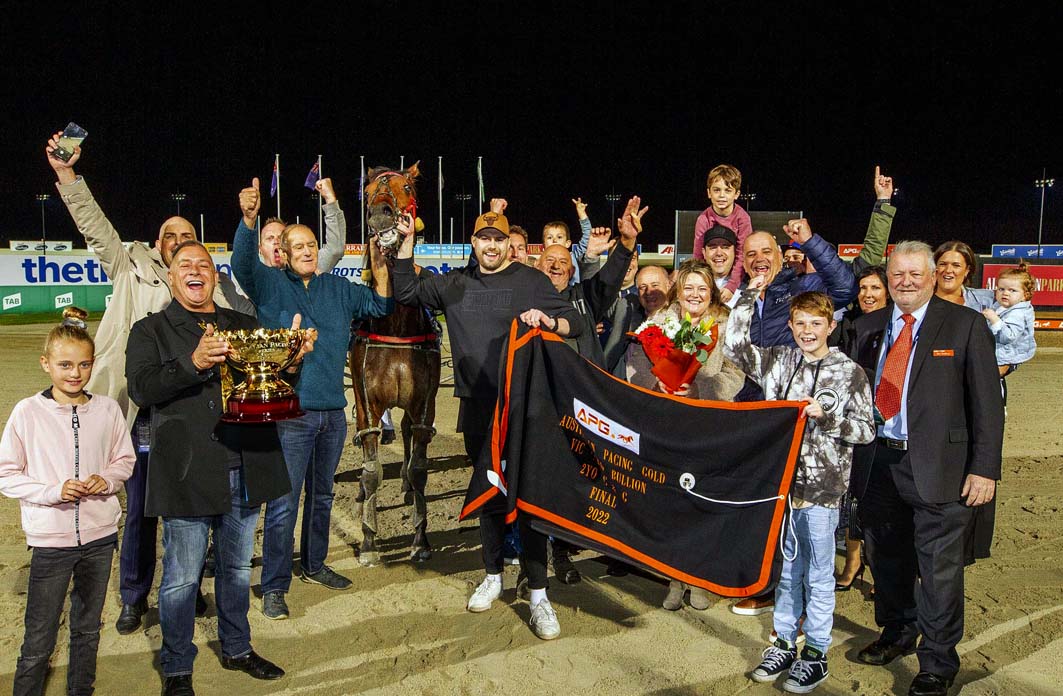 MASS scenes of celebration broke out across  Tabcorp Park Melton’s lawn as Mister Hunter produced a stunning sprint to capture a huge prize for...

MASS scenes of celebration broke out across  Tabcorp Park Melton’s lawn as Mister Hunter produced a stunning sprint to capture a huge prize for his big band of owners tonight.

Supported by a 17-member ownership group, Mister Hunter captured the Group One Australian Pacing Gold Bullion Final amid a loud chorus of cheers.

With Jack Laugher in the cart, the Vince Dicocco-trained two-year-old rattled home to improve from last to first.

“It does make it feel that bit better doing it for a big group of owners,” Laugher said.

“They all probably haven’t had a great deal of horses in their time, but there’s just a bunch of them that own little bits and pieces of him.

“They were all here tonight and cheering him on – they all got a great thrill out of it and so have I and it’s great for the sport really.”

The win was Laugher and Diciocco’s first Group 1 triumph.

“It’s always something that you would like to achieve but when I first moved over from Tasmania that probably wasn’t part of the plan,” Laugher said.

“I’m probably just lucky enough to be driving a few nicer horses now. I was lucky to pick up this one for Vince and all the guys that own him at Ballarat last week.

“He put the writing on the wall and he was just too good, it didn’t really matter who drove him tonight. I was lucky enough to get the steer, I am very grateful for that.”

Laugher showed a very patient hand and was happy to wait until approaching the final turn before setting making his move with Mister Hunter.

The confidence was quickly rewarded, with son of Huntsville entering the turn last and departing it level with the leaders.

From there he quickly sprinted clear for a 6seven-metre win from Will He Reign, with Staroftheshow 15 metres away third.

“Sitting on a helmet he doesn’t feel you’ve got a lot there, but when you pull him out he’s happy to run for you,” Laugher said. “I think going forward he’s going to be a lethal horse with a sit.”