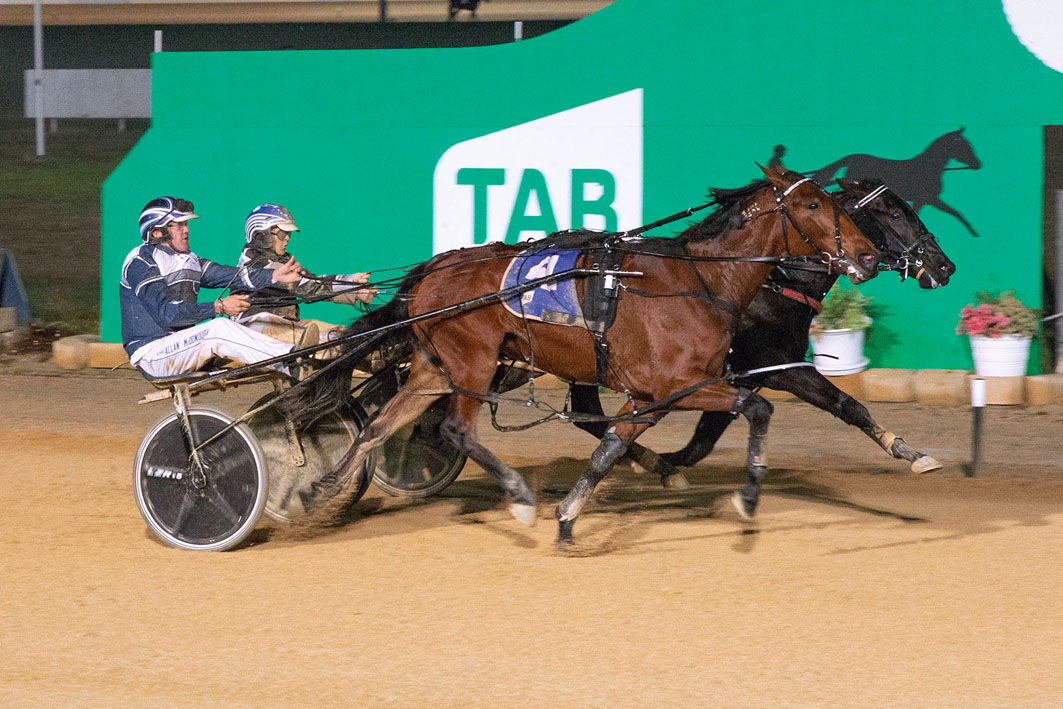 ENCIPHER, on the outside, proved to good at Globe Derby - Photo Walter Bulyga

IT WAS billed as a potential Billinger Bonanza and that’s how it unfolded. After dominating last weekend’s heats with five wins, Mark Billinger was...

IT WAS billed as a potential Billinger Bonanza and that’s how it unfolded.

Driving in five Finals, Billinger registered a treble and a third.

“It was a good night,” Billinger said. “These nights don’t come along very often, so to have a bit of success when they do is terrific.”

Billinger kick-started his wins with Mercenary, which was too strong in the Two-Year-Old Trotters’ Final.

After racing in the ‘death seat’ the Kelvin Barker-trained son of Majestic Son forged his way to the front in the last stride to score by a head from the leader, My Bad Habits.

“That was a pretty good run,” Billinger said. “He’s done all the work and still proved too good.”

Billinger then combined with boom filly Encipher which was never seriously challenged on her way to a five-and-a-half win from Elegant, with Flirting 16 metres away third.

Trained by Emma Stewart, Encipher rated 1:56.2 over 1800 metres to take her record to five wins and two seconds from eight starts for earnings of $252,758.

Bred locally by Tyson Linke, the daughter of Captaintreacherous provided Billinger with his 10th victory in a Final of the two-year-old pacing category.

Partnering with Stewart again, Billinger was triumphant with Treachery which defended her title with the greatest of ease.

Pushed through from her second row draw to be outside the leader before gaining cover, Treachery sprinted to a 12-and-a-half metre win from Dancing Finn.

Runaway Celebrity, a stablemate of the winner, was seven metres away third.

Rating 1:57.3 over 2230 metres, the daughter of Captaintreacherous joined her dam, Lovelist, on the Group Two’s honour roll.

Also trained by Stewart and driven by Billinger, Lovelist was successful in the 2015 edition.

“Her mum was a nice filly and she is even better,” Billinger said. “She showed how well she can sit and sprint tonight, but she has also proven she can lead or do work…she’s quite versatile.”