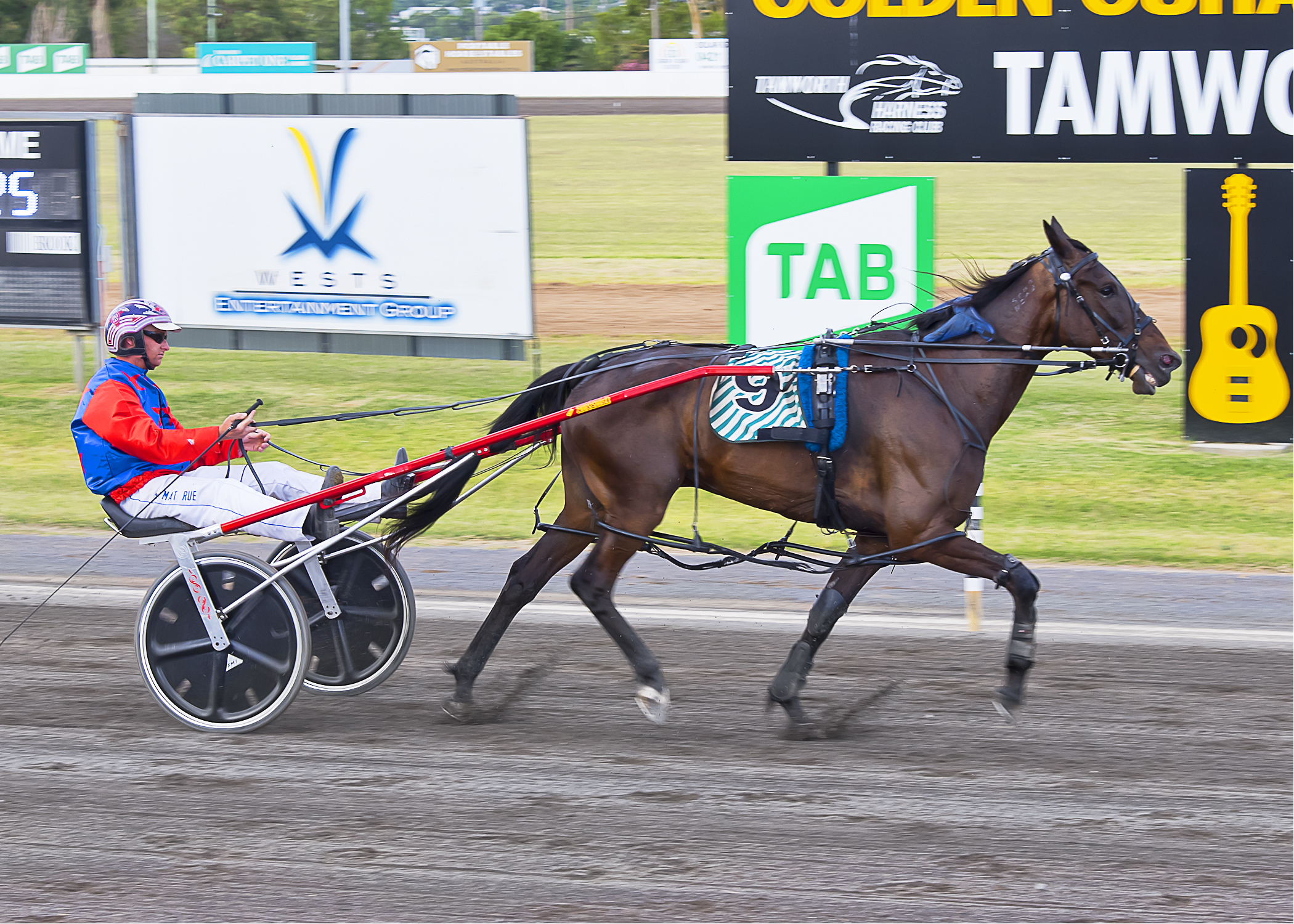 Golden Guitar8 Harding2 Rue1
PRECIOUS few trainers and drivers get the chance to boast that they have won the $30,000 Multiquip Golden Guitar Final more than once in...

PRECIOUS few trainers and drivers get the chance to boast that they have won the $30,000 Multiquip Golden Guitar Final more than once in its 36-year history.

In tonight’s running of the feature, Geoff Harding will be looking to create more history if he wins the race and becomes the first to notch up three wins in the time-honoured race.

As a reinsman Harding won the 2007 Final behind Let’s Ride The Tide and in 2015 as both the trainer and an owner with Strathlachlan Andy, a horse he raced along with his son Matthew, who took the reins on that occasion.

Harding has two runners engaged in the Golden Guitar Final after both won their qualifying heats – Rocknlachlan from barrier nine and The Choreographer from barrier four.

Geoff Harding is a former Moonbi resident and north-west trainer who made the move to the Newcastle area a few years ago and is regarded as a quite achiever in the sport and he sums up his chances.

“You need luck” said Harding “and a good driver”.

Harding believes he has the stock – with Sydney reinsman Robbie Morris set to take the drive behind The Choreographer and Bathurst reinsman Mat Rue behind Rocknlachlan.

Rue drove both pacers in their respective heats with The Choreographer covering his 1980 metre heat in 1.58 and Rocknlachlan in in 1.58.4

“I got two winners into the final and a first reserve so we will have to see how we go with the draws,” said Rue who spoke of his wins behind the The Choreographer and Rocknlachlan.

Rue has drawn the first emergency with his own pacer Ziggy Rocks, who finished third to Balducci (Amanda Turnbull) in the third heat.

Rue gave an insight into the run of Rocknlachlan in taking out the second heat.

“There was a bit of speed on early in the race that got us out of our comfort zone.

“Geoff’s horses just keep giving and Geoff himself is no stranger to winning this series so let’s hope this horse wins again next week in the final.

“He was very relaxed in the race which I think is the secret to this horse, but he felt great.”

With Lifeofbrian (Amanda Turnbull) and Valoroso Hanover leading the field Rue was at the back of the field before making a three-wide run 600 metres from the finish.

“I was probably about 50 metres off the lead so it was a big run,” said Rue with Rocknlachlan scoring a 19-metre win over Lifeofbrian with Getarattleon (Josh Gallagher) two metres away third.

The fourth heat then saw stablemate The Choreographer enjoy his barrier draw out of four and making his way to the lead.

“He worked his way to the lead with not too much effort – it took him a couple hundred metres to get there,” said Rue.

“I let him run pretty solid fractions all the way.

“Geoff indicated before the race that he would need to run a bit so he should be ready for the final.”

The Choreographer had a mile rate of 1.58 with quarters covered in 30.5 seconds; second quarter 29.8 seconds; third quarter in 28.2 second and final quarter in 31 seconds.

The Choreographer had a 2.9 metre win over Ticktockpocketwatch (Josh Gallagher) with Yourblueyescrying (Andrew Bourke) another metre away third.

Hardings are on a mission
Alchin gets a double shot at Tamworth features
Alchin chasing a Golden Guitar Trifecta
Harding’s the ‘King’ of the Guit...
About author