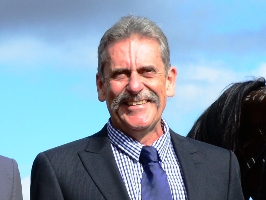 Jared ‘fit’ enough to be a contender

Kahlefeldt1 riverina10
AT the beginning of April, Jared Kahlefeldt’s world was turned upside down. The Covid19 pandemic abruptly shut down his highly-regarded and well-patronised Fitness Centre...

AT the beginning of April, Jared Kahlefeldt’s world was turned upside down.

The Covid19 pandemic abruptly shut down his highly-regarded and well-patronised Fitness Centre in the heart of Wagga and to date, a decision on when gymnasiums will be allowed to re-open in the state is unknown.

The gym is Kahlefeldt’s day job and main source of income and when he wasn’t working there, Jared was travelling from track to track throughout the Riverina, driving horses for his father Paul, who trains a big team at his Redbank stables in Lake Albert, a suburb on the outskirts of the south western city.

But instead of looking at the negatives of his business not operating, Kahlefeldt has not been idle, working on strategies to enhance his Fitness Centre, ready for its eventual reopening.

In the meantime, it has given the fitness fanatic more time to spend with his father working with the horses to ensure that their team is a force to be reckoned with on their home track being Wagga’s Riverina Paceway.

“The shutdown has had some benefits that’s for sure. It has given me the chance to concentrate on my driving and spending time with dad the working horses”, said Jared.

Tonight, the Kahlefeldts head to the Riverina Paceway with three runners and although their numerical form doesn’t read well, Jared rates all three rate as having winning chances.

Glamors Symbol, a mare who has been out of form in recent months, will contest the Bedrock Landscaping Supplies Pace (Race 1).

But she did win a race in mid-January and wasn’t beaten very far when finishing fifth on April 17.

Their second runner is The Maniac who will line up in Race 6, the A C Electric Pace.

The mare is a fast beginner that has been racing consistently without winning.

Her best recent run was back on April 5 when she was narrowly beaten into second placing after racing in a forward position.

Fantasy Blaster is the third of the Kahlefeldt runners in the Supermix Concrete Pace (Race 7) and the mare will appreciate a drop in grade from that of her previous start when she finished rearward.

“I really think that all of my drives will be very competitive tonight. Competition has been really strong in the Riverina over the past month, but we have been very fortunate to have racing right on our doorstep,” said Kahlefeldt.

Keeping up the family tradition
Heavy hitters ready to cash in
This could be a ‘Day’ to remember
This ‘Bopper’ could be something speci...
About author