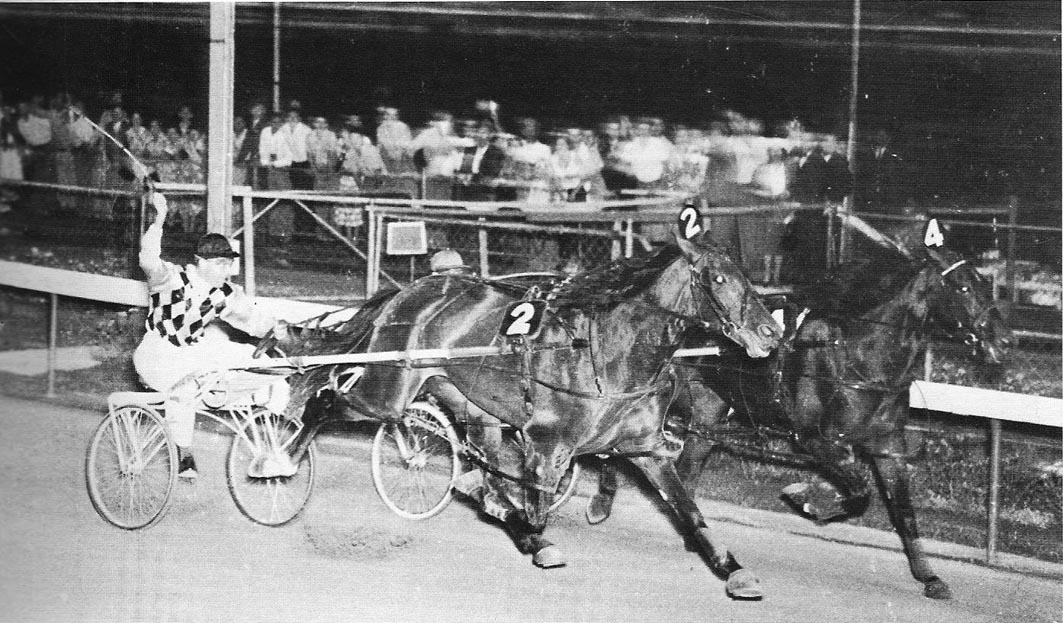 GENTLEMAN JOHN, driven by Eric Rothacker, was too good for Mineral Spring on the inside in the 1956 Harold Park Inter Dominion Final.

GLOBE DERBY was once again instrumental during 1956 Inter Dominion, with eight of the 10 finalists descendants of the immortal sire, including the winner, Gentleman John.

Rain played havoc with the Championship, although a total crowd of 110,708 flocked to Harold Park to witness the three rounds of heats and the Final – just 5000 less than the previous Sydney Inter Dominion in 1952, which was conducted in near-perfect weather.

The New Sales Wales Trotting Club – now known as Club Menangle – spent thousands of pounds on improving the Glebe circuit, and allocated a record sum of 36,500 pounds for the series, with 12,500 pounds on offer for the Final.

The first round of qualifiers were scheduled for February 11, however, were postponed to the 15th due to heavy rain.

Gentleman John led throughout at 20/1 in 2:09.6, with Hedonist and Heather Brigade filling the minors, while favourite Mineral Spring and New Zealand star, Caduceus. were forced wide in the run home and were unplaced.

Springfield Guy, another son of Springfield Globe, also led all-the-way for driver A. Sindel, while Blue Gamble came off 12 yards and sixth at the bell to defeat Van Hall and Dainty Rose in 2:08.6.

These heats were first postponed from February 18 to the 22nd due to rain and then again until the 25th, which was the original date of the Final!

Conducted over 15-and-a-half furlongs, Blue Gamble made it two wins from as many starts in the series while Thelma Globe and Mineral Spring were the others successful on the night.

Thelma Globe, a New Zealand-bred daughter of Springfield Globe, was driven brilliantly by Jack Pringle, coming from 11th at the bell to win by a length in 2:10.6.

Mineral Spring, handily placed after beginning from 12 yards, won by a length-and-a-half from Caduceus, which was again forced wide from his 36-yard mark.

Despite the extra workload, Caduceus returned the fastest rate of the night – 2:10.4.

The 13-furlong heats were held on Tuesday, February 28 with crowd favourite, Active Ayr, taking out the opener.

The son of Van Ayr and Rose Royal, trailed leader Frosty Nelson early and led for the majority of the last two laps to beat the early pacemaker by a half length.

Again Caduceus finished third but returning the fastest rate of the night in 2:07.4.

Active Ayr’s winning rate was 2:08.6 and Caduceus was driven once again, like he was on the second night, by Jack Watts, who was sitting in for regular driver Jack Litten, who returned to New Zealand after receiving news his daughter was ill.

Para Step caused a huge sensation by winning at 200/1, the South Australian was handled by his part-owner K. Bambridge, a sergeant in the army.

Set Point, a four-year-old son of Lawn Derby, was successful in the other heat.

There were 22 point scorers in total from the heats, with those registering four or more points progressing to the Final.

Friday, March 2 was the new date for the Final, however, it was in turn put back three days.

Despite being held on a Monday night, a crowd of 34,020 flocked to Harold Park and wagered a season-high 88,267 pounds on the totalisator. Tote betting on the Final was 20,000 pounds.

Active Ayr broke shortly after the start as Springfield Guy, driven hard by Sindel, led while Gentleman John was positioned three-back along the rails by Rothacker.

Blue Gamble and Caduceus, both well back at the bell, made their runs along the back straight while Mineral Spring, fourth and fifth for most of the race, hit the front on the home turn.

Desperate for an opening, Gentleman John was squeezed through a welcome gap before finishing fast along the centre of the track to beat Mineral Spring in a classic photo-finish.

Caduceus, again registering the fastest rate of the race, was third in 2:07.8.

Gentleman John, beginning off 12 yards, was a second slower in winning.

Lucky to be alive after sickening fall
Mare wins feature while in-foal
Well-seasoned horseman celebrates in style
Draw crucial for filly’s chances in Group On...
About author