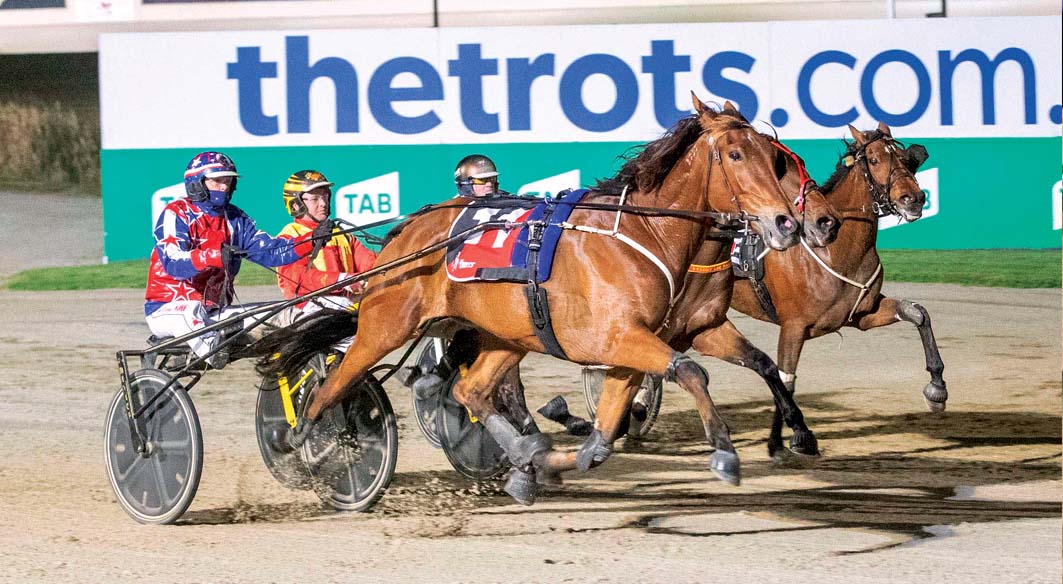 SHEZA PLEASURE, on the outside, provided Dennis Paton with his first Group One thanks to her victory at Tabcorp Park Melton last night - Photo HRV

SOME misspent youth has ultimately led to Group One glory for Dennis Paton. Spending his adolesces in the heart of racing country – Flemington,...

SOME misspent youth has ultimately led to Group One glory for Dennis Paton.

Spending his adolesces in the heart of racing country – Flemington, Ascot Vale and Moonee Ponds – Paton found himself drawn to the Showgrounds of a Saturday night.

Too young to purchase an entry ticket, Paton would stop patrons before the gate to ask if he could walk through the turnstiles with them.

Once in, Paton would savour the thrill and excitement of the trots

“My parents weren’t interested in the trots, but I loved getting into the Showgrounds,” Paton said.

“I had to stop blokes before they got to the ticket box and ask if I could go in with them as I needed an adult to enter.

“I remember one night the gate attended said to me ‘you’ve got more fathers than any kid I know’!

“He knew what I was doing but didn’t try to stop me.”

Eventually obtaining his trainer’s licence, Paton has enjoyed his share of success throughout the years, including the 1983 New South Wales Trotters’ Derby with Grand Polly.

Fast forward to last night’s Tabcorp Park Melton meeting and Paton was basking in the glory of his “greatest moment” thanks to Sheza Pleasure.

Breaking her maiden status at her ninth start, Sheza Pleasure captured the Home Grown Classic to provide Paton with his first Group One victory.

“My feet still haven’t touched the ground yet,” Paton said this morning. “We bred and own this filly so to win a race like this with her is just amazing.

“I know she hadn’t won going into the Final, but if you watch her run in the heat, it was huge.”

Driven by world champion reinswoman Kerryn Manning, Sheza Pleasure was given time to settle into her stride from her second row draw before being sent forward three-wide during the middle stages to sit outside the leader, Keayang Xena.

Forging her way to the front halfway along the home straight, the squaregaiter completed a two-metre win from Keayang Xena, with Evas Image a metre-and-a-half away third in 1:59.6 over 1720 metres.

“What a terrific run from her and drive from Kerryn,” Paton said. “Kerryn summed up the race perfectly and got the best out of her.

“I wasn’t sure where I was going to head next, but after talking to Kerryn, I will give her a crack at The Redwood.”

By Bacardi Lindy, the two-year-old is from Sheza Comment, which has produced four winners from six starters, including Millys Magic which scored at Globe Derby a couple of hours before her half-sister’s top shelf win.

“I bred Millys Magic, which is named after my great granddaughter,” Paton said. “She was premature and weighed less than 500 grams when she was born, so it took some magic for her to survive.

“Their dam Sheza Comment would have been the best horse I’ve had, but she had terrible laminitis in both front feet so I never pushed her and she went to stud unraced.”