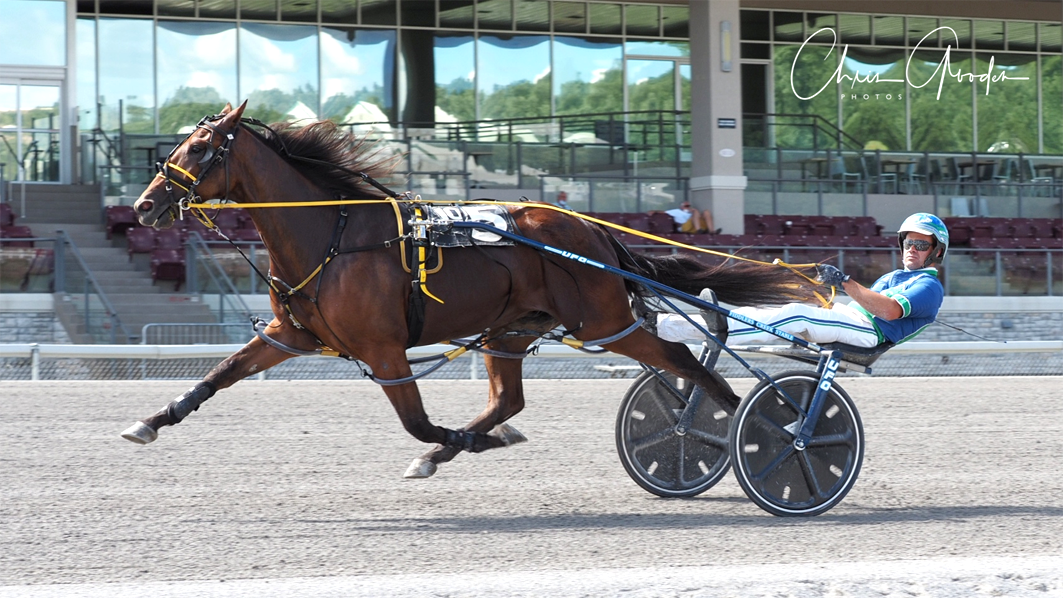 Domination at The Meadows

In the Albatross Pennsylvania Sire Stakes second division, the smart Betting Line colt Fulsome left hard from post 4, Fulsome showing great gate speed to be first up on the outside at the quarter pole. The colt was then able to sweep by taking the lead and never looked back taking a new lifetime mark winning in 1:52.1. Fulsome, out of a Somebeachsomewhere mare, is trained by USA top conditioner Ron Burke and was driven by Yannick Gingras. The win boosted his earnings to $42,232 in just three lifetime starts.

The fourth $54,000 Albatross division was won by The Legend Hanover which quickly grabbed the lead in a :27 first quarter and led every step of the way to win impressively in 1:52. By Somebeachsomewhere and out of a Sportswriter mare, “The Legend” was driver by Chris Page for trainer Brian Brown.

First Crop Sire Betting Line, who, after only four weeks of two-year-old racing, has an incredible 82 starters from 119 foals already this season, saw three of his sons victorious in the Stallion Series divisions. Batterup Hanover (out of a Somebeachsomewhere mare) won his second in three starts taking a new lifetime mark of 1:54.3 for driver Dexter Dunn and trainer Chris Ryder. Dunn & Ryder also combined with Rifleman who dominated his rivals winning convincingly by eight metres in 1:53.3. Rifleman’s dam is by another Empire alumni in Rocknroll Hanover.

Driver Brian Sears piloted Twin B Edge to a Betting Line quinella. Twin B Edge made his move at the top of the stretch and cruised home to win by nearly two lengths in 1:52.4 over Get Along, also by Betting Line. This was the first lifetime win for the Casie Coleman-Herlihy trained colt who is out of a Rock N Roll Heaven mare.

Whichwaytothebeach (Somebeachsomewhere-Swinging Beauty- Art Major) zipped to the front for driver Andrew McCarthy and prevailed in a sizzling 1:51.4 – setting a new 2YO stakes record. Trained by Roland Mallar, this was Whichwaytothebeach’s first lifetime victory.

The Captaintreacherous Bazooka Bazooka Hanover’s performance in his Stallion Series division was quite exciting from post 9. Bazooka Hanover made several moves for driver David Miller during the race to be fifth at the head of the stretch. He then sprinted past his challengers to cross the line first in a new lifetime record of 1:54.1. “The 9 hole? That’s not an easy spot, especially for two-year-olds is it?” Miller said. “He really went a good race, even with the tough trip.” This was the second Stallion Series win for Bazooka Hanover who was is trained by Blake Mcintosh. His dam is the Western Terror mare Bittorsweet Terror.

Deja vu all over again!
Scooter all revved up
Returning to scene of greatest triumph
Timely reminder of Hurrikane season
About author