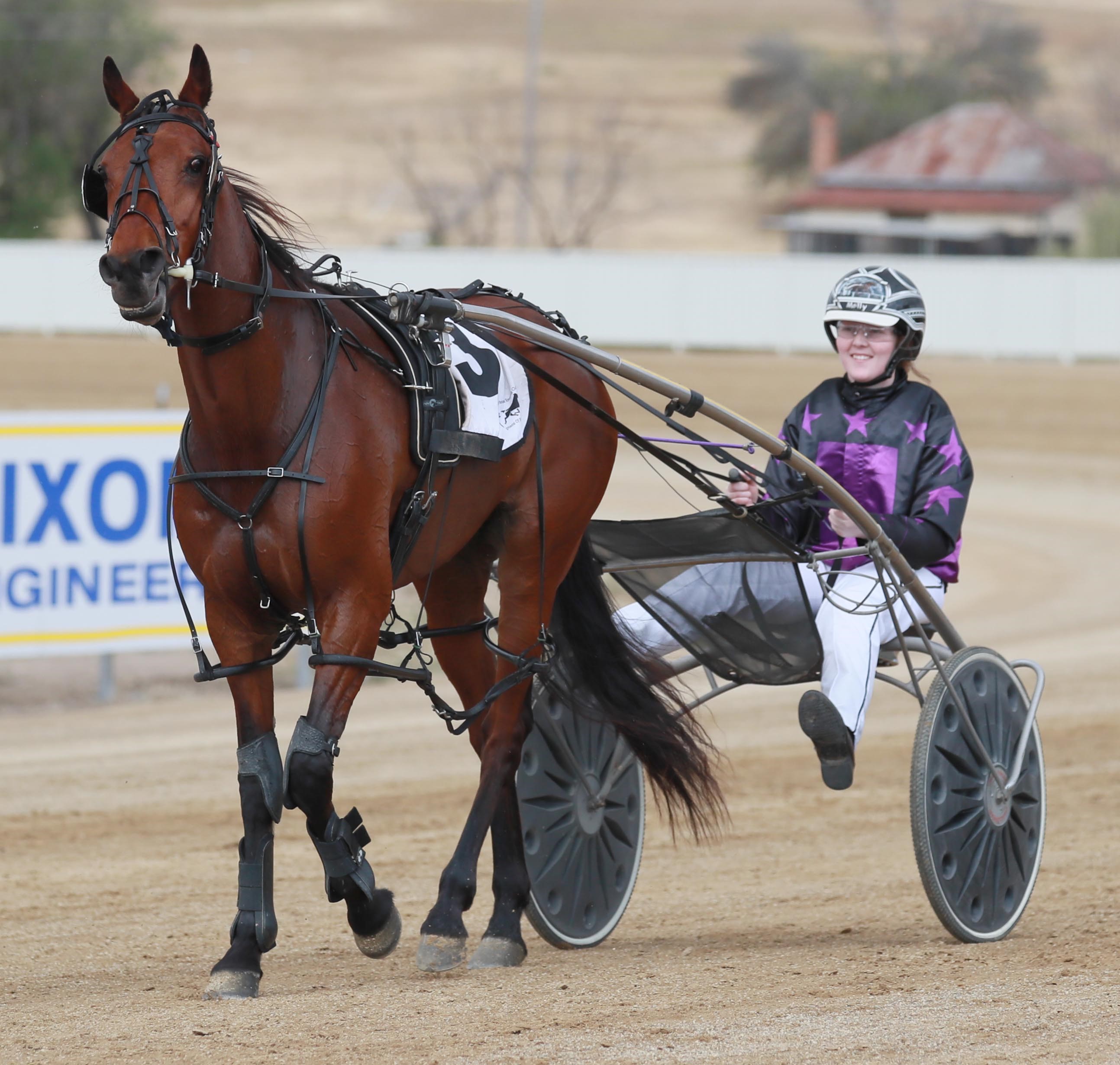 Fastestgirlintown with Molly Turton aboard

Wagga7
JUST who is the Fastestgirlintown? . . . or certainly in the harness racing ranks – was answered when the mare with the catchy...

JUST who is the Fastestgirlintown? . . . or certainly in the harness racing ranks – was answered when the mare with the catchy name won at Wagga on Tuesday night.

Fastestgirlintown has notched up two wins at Wagga, at the succulent odds of $34, with her trainer-driver and part-owner Molly Turton urging her on.

Importantly for Turton, the victory meant additional funds being raised for Team Teal, which raises money for ovarian cancer research.

Each time a female driver wins a race $200 is donated to the cause during February and March with thousands of dollars having been raised for several years.

All female drivers wear teal-coloured driving pants during the promotion.

For 21-year-old Turton, she was glad to produce a win not only for herself, but for a great cause.

“It’s a bit of extra money for Team Teal and I also train and drive her myself so it’s very rewarding,” Turton said.

“I race her with my Mum and she has won a few races for us.

“She had a bit of luck with the good draw and the leader drifting off which allowed me to get through and win.”

Turton is a graduate of the mini trotting ranks – a thriving organization of budding young drivers who learn their craft on mini and shetland ponies and have large numbers in the Riverina.

Turton is based at Junee and only has Fastestgirlintown in training.

Her plans are simple . . . keep racing and hopefully winning before the mare is retired to stud.

“I may keep her racing for another season, but eventually she will become a mum,” Turton said.

Meanwhile, in one of the closest finishes seen at Wagga in the past 12 months of racing only millimetres separated three horses with a dead-heat declared for first.

Long shots Majoress Jujon ($51) and Shes Courageous ($26) were joint winners only a nose in advance of Seattle Trace ($26).

One of the favourites, Dancing Chick, appeared set to hit the front when she galloped which helped the chances of Major Jujon, according to trainer-driver Gerard Cooper.

“She probably wouldn’t have won if that didn’t happen,” Cooper said.

“It’s the first dead-heat I have been in and I actually thought I may have been beaten.”

Driver Miranda McLaughlin burst through along the inside with Shes Courageous, whose recent form includes three wins and two placings from her past six starts.

Trevor Allamby said it had been a tough road with Pensare Princess, who is one of the last of the progeny to race by her sire – former champion Our Sir Vancelot.

“She can be a real handful, but Patrick gets on well with her and does a lot to get her right,” Allamby said.

“She has a fair bit of speed and is settling down, so hopefully she can keep improving.”

Big brother shows the way
Preview: Wagga Friday September 22
WATCH OUT MOLLY
Jones rallying for a great cause
About author